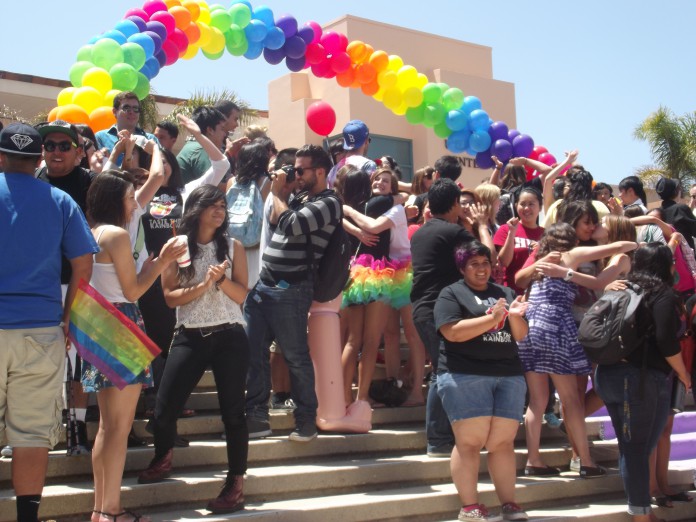 Gay, straight and lesbian couples united on the steps of Storke Tower to participate in Queer Wedding, the highlight of Pride Week’s events on May 18. Vice Chancellor for Student Affairs Michael Young presided over the event, uniting the couples in a group ceremony as they each held the hands of their partners. Underneath a rainbow balloon arch and surrounded by flowers and music, couples descended the lavender-clad steps to exchange rings and the occasional kiss.

Jacob Dwyer, Pride co-chair, said the ceremony is open to both straight and queer couples and invites students to indulge in Pride Week’s theme and “taste the rainbow.”

“It’s a cute ceremony and we’re trying to get everyone involved,” said Dwyer. “I think when straight couples come out and get married in this, it’s kind of saying that they show their support behind us and they’re there to help us. They understand our situation. They want to get queer married just like we do.”

Queer Wedding initially got its start as a protest to the 2008 passage of Proposition 8. The proposition defined marriage as between a man and a woman in California, effectively prohibiting queer marriages and their validity and recognition within the state. The event has grown from this initial goal to represent the joy and happiness LGBTQ couples hope to one day legally enjoy.

Third-year Sarah Tran “queer married” fellow third-year, Sally Tran, at the ceremony and the two said Pride Week offered the LGBTQ community visibility and acknowledgement by the rest of the University of California Santa Barbara campus.

“Huge visibility as well as the workshops,” said Sarah Tran. “Learning about and discussing the issues that pertain to the queer community. It’s a great space for us to communicate and really figure out what we’re doing, who we are, what is ‘our community.’”

Sally Tran said the event questioned the traditional definition of marriage as reaffirmed by Proposition 8.

“To break the marriage institution and the whole connotation of it all,” said Tran, “so [we’re] kind of reclaiming our space by creating this bigger, safe space and celebrating our identities.”

The ceremony was interrupted for a quick toast praising the unity of the community and food was later served as the couples and allies interacted along the steps.

“It’s a nice kind of happy closer,” said Dwyer. “I’ve been amazed about the turnout this year. It’s been really great… I’m just really happy at the support the campus is giving us this week.”

Unity rang through the week as a consistent theme and Dwyer hoped students would walk away from Pride Week with a expanded view of the LGBTQ community.

“Something that I hope the campus gets out of this is getting to know the community,” said Dwyer. “A lot of times people don’t realize all the different aspects of the community and so kind of coming to events like these you see everyone in the community and see that they’re actually students here at UCSB, they’re just like you. There’s no differences really.”