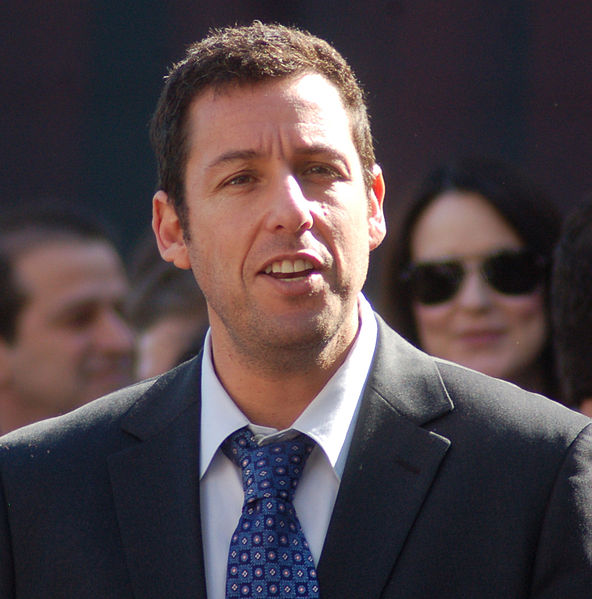 Movie star Adam Sandler’s popular film roles often end up falling under two quintessential character types. One is an over-the-top, ridiculously lazy homeboy with an exaggerated Brooklyn accent, and the other is a sweet, honest, likable guy-next-door who never fails to charm females and inspire hysteric laughter simultaneously in blockbuster rom-coms. The former personality made an appearance at University of California Santa Barbara on the evening of May 15, as the mid-30s version of a kid who impregnated his elementary school teacher in a pre-screening of “That’s My Boy.” But the latter Sandler personality was there too- in the flesh at Campbell Hall with fellow “That’s My Boy” actor Nick Swardson.

By 7:05 p.m. the lights were out, the special screening of “That’s My Boy” started, and the lecture hall transformed into a crowded movie theater, filled with an enthusiastic responsive audience. The thrilled, energized air in the room made an enjoyable and satisfying film experience in which to see the average comedy.

Ninety percent of the humor in “That’s My Boy” was outrageously crude, but those at the “University of Casual Sex and Beer” relished this unrestrainedly vulgar hilarity. The laughs didn’t stop throughout the evening.

But it was clear that the screening was not the reason so many students dropped the books to come out. At least 100 Gauchos rose from their seats to give Sandler and Swardson a standing ovation as they casually strolled down the left aisle. If Sandler’s well-known egg-shaped face did not suggest otherwise, he could have been mistaken for a UCSB fifth-year student.

Based on the way Sandler portrays himself to the media, it should come as no surprise that he continued this laid-back demeanor on-stage as well. He conversationally answered questions from students and revealed details about his home life, his true sports allegiances (Sandler is, in fact, not a Lakers fan. He cheers them on at games to appease his buddy Jack Nicholson, but secretly supports the Knicks) and that he owes his success to his roommate at NYU, who would write up jokes for him.

The 20-minute Q&A after the screening with Sandler and Swardson centered around their respective careers, famous faces the men have worked with, and UCSB.

“I would never graduate here; it would be so hard to go to school. It is so gorgeous… I would jerk off looking at the trees,” said Swardson of the UCSB campus.

Sandler also disclosed that, of the various characters throughout his film repertoire, Happy Gilmore and Billy Madison were his favorite characters to play.

Various fans in the audience jumped at the chance to speak directly to the comedian.

“Hey Adam, I used to be your neighbor on Bellar Road,” said a graduating UCSB senior in the audience.

“No way, the kid from across the street?” responded Sandler. “You look fantastic!”

The crowd went wild at Sandler’s genuine recognition of his old neighbor.

“I wanted to ask you, Adam, why’d you have to move? Because I wanted a pick-up line for girls,” said the student.

Another highlight included a female student explaining to Sandler that snapping a photo with him was something on her personal bucket list, to which he promptly brought her up to the stage for a photo. Several other students asked for autographs from Sandler; he easily obliged, saying he would supply them after the talk.

Both actors showed a great degree of openness in their answers to all sort of audience questions- except Sandler was a bit understandably tight-lipped, however, after a certain question: “Can you explain to me, what was the first time both of you saw boobs?”

The questions persisted for about 20 minutes, then just before 9:30 p.m., Sandler and Swardson were ushered away, much to the very vocalized dismay of the students.

Adam Sandler’s production company approached AS Program Board about a potential pre-screening of the film.

“Adam had a great time,” said third-year communication major and Films Coordinator for Associated Students Program Board Cassandra Garcia, who was the head organizer for the event. “He’s been to UCSB before and he was really excited to come back. Honestly, it’s an honor and a privilege that we get to experience this.”

AS Program Board barely advertised the event, aside from a Facebook event and teasing it in the Daily Nexus and The Bottom Line; the promise of Big Daddy himself was enough to pack Campbell Hall as if it was the first day of Fridlund’s Psych 1 class. Gauchos lined up all the way around the UCEN to get their hands on their free tickets, some arriving over two hours early for the ticket distribution on the day of Sandler’s arrival.

“I wanted to breathe the same air as Adam Sandler,” said first-year bio-psychology and communication major Emily Lofthouse right after the event.

Any Gauchos who missed the event can catch “That’s My Boy” in theaters on June 15.