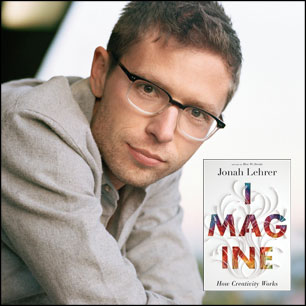 Jonah Lehrer, neuroscientist and writer of several books on neuroscience and creativity, believes the human mind is capable of limitless potential, and that we are only just beginning to unravel some of its mysteries. Lehrer delivered an illuminating speech at Campbell Hall last Thursday, May 17 as a part of the Arts and Lectures Series, in which he revealed his discoveries about the dynamics of creativity and explained how to exercise your entire creative capability.

Lehrer’s new book, “Imagine,” shares some tactics for stimulating your creative mental prowess. You might not realize how much time you spend using your creative brain here at University of California Santa Barbara, but surviving academically and socially in a university requires a huge amount of brainpower. It’s not just art, music and theater majors that use their creativity on a daily basis; all students need a certain amount of creative skills to learn how to best prepare for midterms, absorb massive amounts of information in the fast-paced quarter system and memorize solutions to complex math problems in fields like economics, physics or statistics.

When working on a difficult project or task, finding moments of insight may seem like an elusive or even magical process to some. Lehrer suggested that we realize that they cannot be forced and are spontaneous. He also believes when we have insight or a good idea, we should trust our own judgment. Lehrer advised the audience that when they had their next moment like this, they should stick with it and see it through. So during finals week this spring when you’re hammering out your last papers and you have a brilliant, yet potentially disastrous idea- keep typing. Maybe you’ll strike gold.

Lehrer also spoke about following your own natural mental energy. He insisted that the best solution for dealing with creative problems is to relax. Whether you like to play a little Draw Something, jump in the pool or go for a run- do something that allows your mind a relief period from the problem. When you’re so bogged down that you realize you’ve been staring at a screen rather than memorizing your study guide, take the break that you deserve. And of course, Lehrer reminded the audience that though these breaks are necessary for your mind to reach its optimum functioning level, for maximum results, you still need to put in the work. Lehrer used the example of Beethoven’ s editing process: the musical genius would go through each line with 70 variations before choosing one. This is a process you might not need to endure for your four-page history paper, but nevertheless, if you want to create an excellent product, put in the time.

Many successful artists, writers, film directors and entrepreneurs are defined by unique personality characteristics and talents. But one repetitive characteristic is what Lehrer calls “grit.” He defined grit as a certain self-awareness, stubbornness and perseverance. Lehrer referred to “Harry Potter” author J.K. Rowling as an example of a person with grit. While supporting her two children, Rowling went from publisher to publisher pitching her story and was rejected twelve times before hearing “yes.”

Grit can be the drive that pushes people to continue pursuing their passion despite negative friction. Regardless of inherent talent, grit is the characteristic that drives the best players, the most successful musicians and the hardest hitters to continue to practice and reach goals that may have seemed beyond their capabilities at first. Lehrer reminded his audience that grit requires negative feedback. Without negative feedback, grit cannot thrive, and we cannot reach new heights without it. Lehrer recited an old Woody Allen joke: “Eighty percent of success is just showing up.”

When speaking on the subject of collaborative creative work, Lehrer also gave some advice that will definitely come in handy for your next group project. You may have chosen in the past to communicate with your group via Facebook messaging, Skype or just plain email. Lehrer argues that collaborations occur best with nearness. If you can meet up in a group that is outside of your classroom, somewhere that is fresh to your minds together, you’re much more likely to develop clear ideas from each other in a new environment. Lehrer said that “something magical happens in a person” during these moments of thinking together.

Creativity is sometimes thought of as a mysterious mythological trait that is impossible to enhance. Lehrer derided this viewpoint, suggesting that creativity is not an impenetrable talent. It is something that we can all possess in different ways and find new ways to exercise.

“No wonder why we have credited the muses for so long,” said Lehrer.