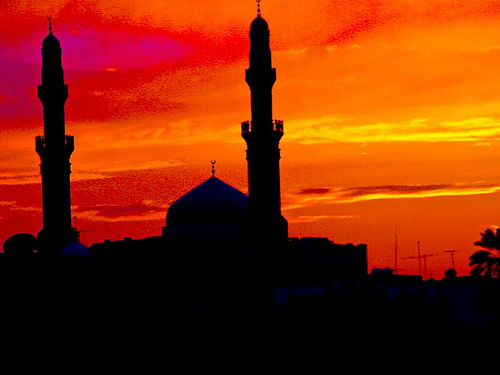 The week of belly dancing, hummus, falafel and vibrant colors has arrived- but there is more than meets the eye.

Middle Eastern Awareness Week began this Monday with a tribute to a variety of states and cultures of the Middle East, including film screenings, ethnic food sales, and many other events in effort to also raise awareness.

Omid Niroumandzadeh, a University of California Santa Barbara alumnus, said this year MEAW “seeks to raise awareness and celebrate cultures of the region. The organizations putting on these events seek not only to shed light on culture but high light political struggles.”

“We are doing more of a political undertone this year,” added Niroumandzadeh.

A main event was the screening of the film “Education Under Fire” in the MultiCultural Center on Tuesday, which directly addressed political struggles in the Middle East that are not necessarily correlated with issues with the United States.

The film brought to light struggles of the Bahai community in Iran against discrimination toward offering higher education. Also featured in the film was Pedram Roushan, a postdoctoral researcher in the UCSB physics department, was interviewed during the film and present for a Q-and-A panel after the movie.

MEAW also coincides with Islam Awareness Week. On Tuesday, “Islamaphobia: Post 9-1-1,” took place, where professor of communications Walid Afifi spoke about the fear of Islam perpetuated by the media and its influence on both the Muslim and Middle Eastern community.

“This is especially important because of the darkness that shadows the thoughts of many regarding the region- because of the political discourse concerning the Middle East, the beauty and light of its many cultures are often forgotten,” said Mousa.

Along with the political issues, cultural events still fill the week. On Monday, Ethnomusicology Professor Scott Marcus led the UCSB Middle East Ensemble at the Lotte Lehman Hall, followed by a music workshop from 4:30 to 7 p.m.

“Conversations with Yama” was also held on Monday in the Multicultural lounge from 6 to 8:30 p.m., which was a discussion with a local imam regarding his transition from street life to one of spirituality.

Aside from the rich culture and history that fills the Middle East to the brim, the conflict there is undeniable.

“It’s the elephant in the room, and it’s such a loaded topic. I think it’s important people are informed about the issues going on,” first-year economics major Anisha Ahuja said.

There will be a Middle Eastern food fair is Storke Plaza Thursday, May 10 from 11 a.m. to 3 p.m. Later that day, there will be a Persian Culture fashion show in the MultiCultural Center from 8 to 11 p.m.