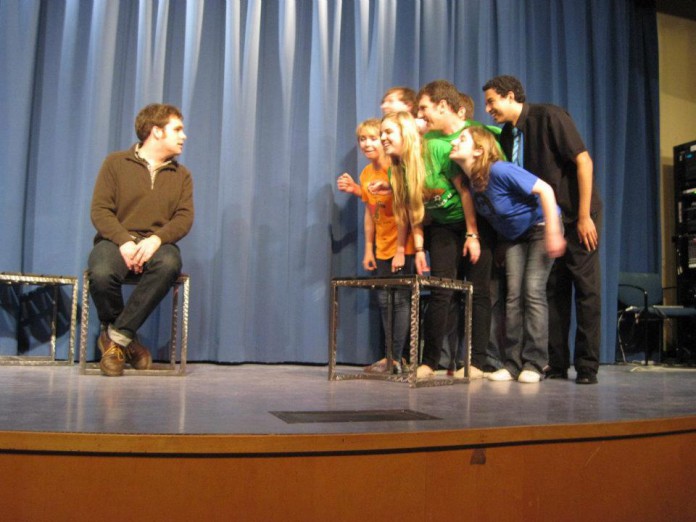 Unscripted comedy, from “Whose Line Is It Anyway?” to University of California Santa Barbara’s own Improvability team, is a raucous genre with the element of surprise. The group on campus performs both short form and long form improvisation, meaning that the comedic style varies from fast-paced puns to scene-by-scene storytelling. As a result, the comedians- these improvisers- must be even more adept and skilled in the art of comedy.

Three such soon-to-be graduate improvisers here at UCSB must soon choose which future path to take: scripted or unscripted.

Tyler Wilson hopes to move to Los Angeles to train in theaters, try his hand at writing and make a career out of improvisation. Since starting with improv comedy in high school, he has developed a love for the craft that has since grown from his experience at UCSB.

Wilson admits a selfish aspect of improv in such instances when the audience cheers out his name, but this appeals to his self-diagnosed “narcissism.” On the team for two years, Tyler also finds the positive atmosphere of improvability appealing.

“I like how playful the team is. They’re very silly and goofy,” said Wilson.

For Trevor Wade, improv comes naturally. Wade was co-founder of his high school improv group “Improver’s Nation.” As an acting major, Wade has been forced to budget his time between theater and improvability, and has finally found a good balance.

“Improvability is unique for me in that it’s the first time I’ve done short form not as competition, unlike in Comedy Sports,” said Wade.

Wade also participated in “Sketch’n’Sniff,” the improv group here at UCSB.  His friends were inspiration to be passionate about the hobby, because in improv, “you’re not trying to be funny, you’re trying to make your team look good.”

After graduation, Trevor plans to move to New York City to take classes at the Upright Citizens Brigade, an improv comedy group that sported the likes of Saturday Night Live’s Amy Poehler and Horatio Sanz.

“I want to be able to do improv as much as I can, I mean, I’ll be paying for it at first, but eventually, it’ll start to pay me,” Wade said.

But not all of the Improvability team got their start prior to life at UCSB. Computer engineering major Mike Erez-Kdosa was biking when a flyer for Improvability auditions was shoved in his hand by a persistent pedestrian. It was the UCB theater in Hollywood that gave him the initial interest to pursue improv, and now he’s been a member of the team for a year.

Erez-Kdosa endorses other students who don’t necessarily have a background in theater should still try out for Improvability.

“[Improv] would have fit into my schedule previously, that’s what I regret, is not getting into it earlier, because now I have these Capstone projects and I’m doing research,” said Erez-Kdosa. “I feel like it’s not enough time.”

Improvability has weekly shows every Friday night at 8 p.m. in Embarcadero Hall in Isla Vista.