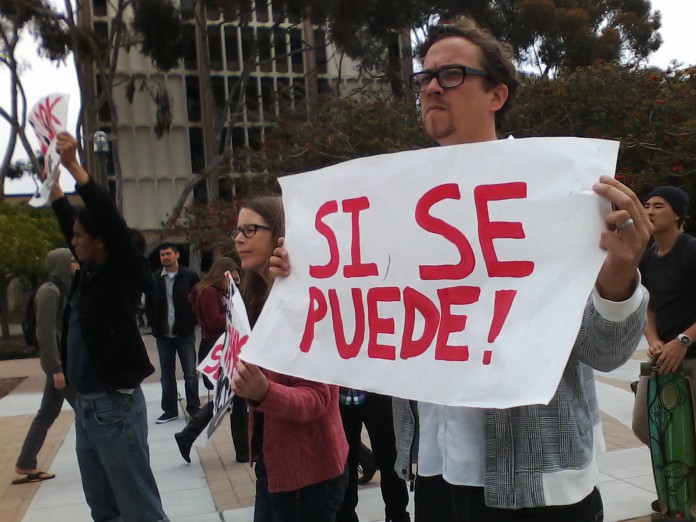 Reclaiming Our Struggle: Immigrants Rights Awareness Week is the first annual week of action on the University of California Santa Barbara campus put on by the group Improving Dreams Equality Access and Success, or IDEAS. The group’s goal is to encourage, promote and further the education of immigrant students by providing sufficient social networks and academic and financial resources. The goal of this week’s events is to educate a greater audience about the issues immigrants face.

“This is a week of speaking out and claiming that there is a struggle that needs to be fought,” said Miguel Martinez, a third-year sociology major with a minor in applied psychology, and the outreach coordinator for IDEAS. “Immigrants have rights, we want to educate the public of things going on and the issues immigrant communities are facing.”

During a lecture given on Monday as part of the week of events, Professor Richard Flacks, who retired after 40 years in the sociology department, said, “The history of May Day is not well known, in the past, immigrant workers have declared general strikes as a symbol that they are all together, that it transcends all cultural barriers to convey common interests. Workers themselves are the decisive force.”

Rocio Almaguer, a third-year political science and Chicana/o studies major said, “We want to learn and start a discussion as to why no one cares about these issues. I’m not undocumented, but I’m an ally. It is not pointless in what we are fighting for, everyone deserves an equal education.”

Professor Ralph Armbruster-Sandoval who teaches in the Chicana/o studies department closed the lecture by stating, “There’s so much we don’t know about history, there are some forgotten people who have made great sacrifices. It just so happens that their sacrifices haven’t worked yet, but you just got to keep on fighting that struggle; you have to show that somebody cares.”

A coming out rally was held on Tuesday.

“We want to show the student testimonies in efforts to bridge UCSB students and the community to unite for the struggle,” said Nayra Pacheco, a fourth-year history of public policy major who helped organized the event. “We all need to mobilize, and create visibility, to bring the immigrant issues to light.”

Gloria Campos, a fourth-year environmental studies major said, “It is important to understand the causes of immigration and listen to the personal stories that arise from our faulty immigration system. We are putting these events on in response to the recent increase in anti-immigrant legislation and human rights violations that are occurring in the US. We want to bring awareness and demand change to the injustices that continuously target our communities of color and our undocumented population.”

Events happening during the rest of the week include a workshop that provides a basic description of immigrant policies and laws impacting communities on Wednesday, May 2 at 7 p.m. in North Hall 1006. On Thursday, May 3 there is a screening of the film “Which Way Home” in Girvetz 1004 at 7 p.m. The documentary shows the many perspectives in immigrant issues from people of all ages. The week of events closes off with a community potluck, “Reclaiming Cinco de Mayo, A Learning Dinner” on May 5 to discuss the significance of Cinco de Mayo not as the gaining of Mexico’s independence, but the observance for the battle of Puebla.