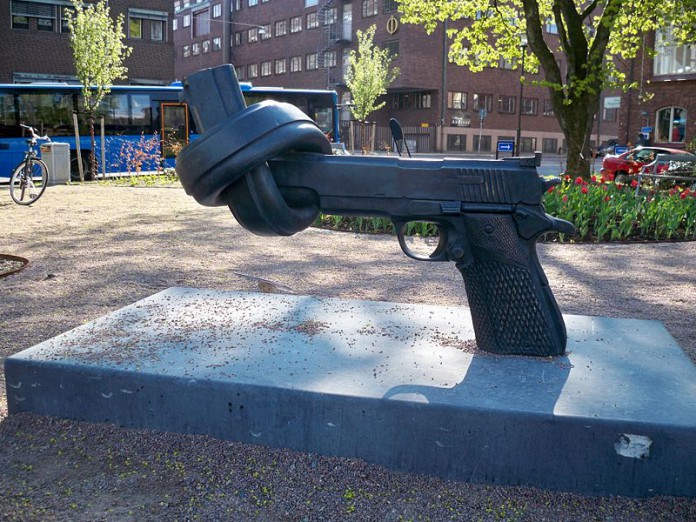 Photo From the Wikimedia Commons
By Mikael Ejdemyr

The Coalition Against Gun Violence sponsored an educational event at La Casa de la Raza to reach out to the local families on the pertinent issue of gun violence and safety in the community and at home. A variety of organizations within the CAGV, such as the Anti-Defamation League and Santa Barbara Women’s Political Committee, stressed the importance of the topic through informational booths for attendees to browse in addition to the impassioned speakers presenting before the audience.

Toni Wellen, the chair and co-founder of CAGV hosted the event, introducing each speaker and emphasizing key points of the coalition’s mission and goals. For 17 years, Wellen has been a part of the CAGV, which includes La Casa de la Raza, and explained that the mission of the CAGV is to promote the careful handling of firearms in households, and appropriate the responsibility of the safety measures onto parents. While Wellen understands that many will still own and keep guns in their home, the CAGV aims to educate parents and individuals to be cognizant of the dangers of firearms.

“Our goal is to encourage non-violence in homes and communities,” said Wellen.

Juan Pablo Herrada, executive director of Palabra, an organization that deals with issues about violence among young people and also part of CAGV, was one of the guest speakers at the event. Through education and communication, Palabra strives to solve conflicts before the contention escalates to violence. Other speakers presented, touching on the multiple facets of gun violence, including homicide, suicide, gun ownership and gun violence in war. Speaking from experience after the death of her 19-year-old son by firearm, Marisa Martinez, founder of Parents of Murdered Children of Oxnard, related to the audience the importance of non-violence and a consciousness about the impact of homicide on the family and community.

University of California Santa Barbara’s Student Veterans Organization President Raymond Morua briefly presented the plans for the creation of a center at UCSB that will provide assistance for student veterans regarding issues like mental health and assuring that the student receives all granted education benefits.

Member of the board and steering committee of the CAGV Arline Young emphasized that educating families about how to create a safer environment for their children leads to a more secure neighborhood and community as a whole, a point accentuated by speaker and community activist, Sharon Byrne. Byrne explained that a neighborhood that knows each other and maintains a sense of awareness of the surroundings will be a safer environment. Another instrumental community activist and co-organizer of CAGV, Christina Pizzaro also believes that raising local awareness leads to higher level of safety and a decline in violence.

“As long as you seek to better the community, we all win,” said Pizzaro.

In addition, safety and non-violence at home carries over into the school setting, where bullying and cyberbullying are commonplace problems. Anais Borg-Marks, assistant regional director of the Anti-Defamation League, works with schools to combat student conflicts through non-violent means.

“We’re empowering students to stand up for their peers and against violence,” said Borg-Marks.