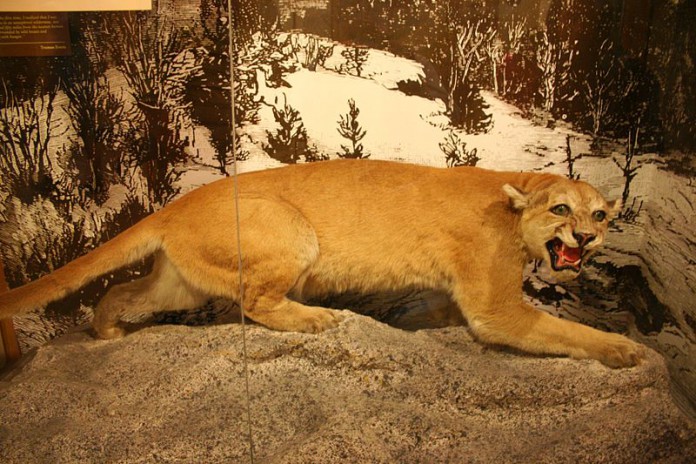 What would you do if you’re walking to class and you saw a mountain lion? Mountain lions are the largest wildcat in North America and they can leap as high as 15 feet and as far as 40 feet, they are also active hunters and may travel long distances in search of food. With all this in mind, keep thinking about what you would do.

Recently, there was a baby mountain lion spotted in downtown Santa Monica, an ocean-side city close to a woodland area, like Santa Barbara.

According to Santa Monica Police Department Lt. Robert Almada in an interview with The Santa Monica Mirror, “attempts were made to immobilize the animal with non-lethal force,” but after unsuccessful attempts using three non-lethal methods- the tranquilizer dart, pepper ball and fire hoses- “they deployed lethal force from our firearms and the animal was killed.”

The mountain lion was killed to prevent it from running through a populated area where pedestrians and cars were present, but it’s so sad. The poor, lost, baby mountain lion was shot down and killed, all before anyone could speak on its behalf to let it live.

Madeline Bernstein, president of the Society for the Prevention of Cruelty to Animals Los Angeles “asserts that an investigation should be conducted into the procedures and training protocols required for safely interacting and subduing wildlife.” I totally agree with her, if the law enforcement that is put in place to protect us doesn’t know how to correctly deal with wildlife in urban environments, we have some problems to fix.

I would think the Department of Fish and Game would not want to kill an animal that is what they call a “specially protected species”, as it the mountain lion. DFG Assistant Chief Paul Hamdorf did try to clarify their actions by stating, “Our hope is always to be able to return wild animals back to their natural habitat. However, public safety is our number one priority.” I understand that they should keep the well-being of all humans in mind but at the same time, sometimes you have more options than just simply shooting an animal because it’s getting agitated and wanting to escape. Forgive the mountain lion for wanting to escape when it is in unfamiliar territory and creatures they don’t usually encounter have harassed it. I felt that it was unnecessary to kill such a creature; it was only a baby mountain lion and did we forget that they have special protection? With a simple Google Search even they can find that out.

This makes me wonder why we aren’t taking better care of our local species. Three thousand, five hundred mountain lions are killed on average each year. If anything we are actively destroying their chances of surviving by expanding into their regions of domain. No one truly knows how the mountain lion was even able to get so close to society, but if you think about it, it was only trying to find a place to live.

In an area like Santa Monica, which is similar in structure to Santa Barbara, they are trapped within the range because it is bordered by freeways, the ocean, and to agricultural plain. They are left to fight to overtake territory that is claimed or try to venture out to find new land unclaimed by other mountain lions.

This is an extremely rare occurrence, but that does not hide the fact that it did happen. It makes one truly wonder if that can happen to us on this campus. I mean, we are only 20 miles away from the Santa Barbara Ranger District, which is located within the Los Padres National Forest. But just to reassure you, don’t start panicking if you think this is going to happen to you, you are not going to be walking to class and see a mountain lion frolicking in a grassy area. Mountain lions, (for the most part) don’t wander into urban places where humans reside.