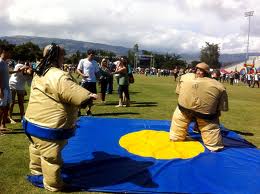 It’s that time of the year again. University of California Santa Barbara’s 34th annual Extravaganza Music Festival is set to take place on Sunday, May 20, and the campus is buzzing with anticipation following the release of the official lineup late Monday night.

The headlining artists are none other than hip-hop icon Snoop Dogg, rising electro-house DJ Wolfgang Gartner, Hawaiian reggae band Iration, Palm Beach indie heroes Surfer Blood and Isla Vista’s own multi-genre act The Fire Department, who snagged the opening spot after winning Associated Students Program Board’s annual Battle of the Bands. The lineup was released at midnight on Monday, May 7 after the list was allegedly leaked online several hours prior.

“We’ve been getting a lot of positive feedback from a lot of students,” commented third-year Zoe Turjacani, AS Program Board’s special event coordinator. “As of now I’m feeling a lot of great energy from everyone.”

The bands will perform at Harder Stadium after the festival gates open at 1 p.m. on Extravaganza Sunday. The spectacle is available exclusively to UCSB students and affiliates in order to avoid overcrowding: student ACCESS cards will be checked at the door.

“A lot of people are bummed about it not being open to the public,” said Turjacani, “but as a board we decided to close it off because the headliners will reach the stadium’s capacity with UCSB students alone. Putting any other type of guest above UCSB students doesn’t sit right with us.”

The event is being paid for exclusively through student lock-in fees this year, which means it’s funded by UCSB students and for UCSB students. AS Program Board wasn’t able offer purchasable tickets to the event due to the popularity of the artists and the projected attendance- the objective is to accommodate any UCSB students who want to attend over out-of-towners or other non-UCSB fans.

With Extravaganza 2012 just two weeks away, UCSB students, staff and faculty alike are getting pumped up for the university’s most famous music festival.

The Extravaganza performers were chosen by an A.S. Program Board panel after pouring over lists of potential artists and pages of collected student input.

“It’s a process,” explained Turjacani. “We go through lots of lists and take suggestions from people on campus. As a board we deliberate about who would be best for our school.”

Isla Vista local band The Fire Department, which comprises more than 10 members and plays an eclectic mixture of hip-hop, R&B, funk, rock and reggae, has generated a lot of buzz as the festival’s scheduled opener. The group won its opening status on March 1 at the AS Program Board Battle of the Bands, which was held at the Hub and simultaneously broadcast on KCSB.

Extravaganza hype is expected to only grow as the big day approaches.

“Be excited for local bands to be incorporated in the event, and keep your eyes open for the new bands that will be playing,” said Turjacani.

General information can be found on the AS Program Board website under: http://aspb.as.ucsb.edu/extravaganza/.

Photo Courtesy of Her Campus

At Home Movie Screening: The Death of Theater and the Birth of Digital Spectacle

The Dark Side of Stardom in The Weeknd’s “After Hours”