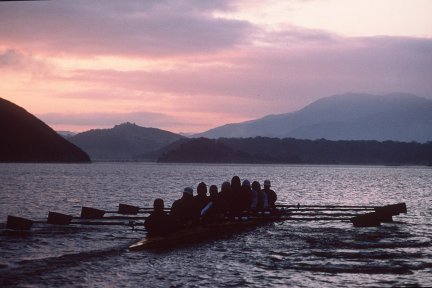 The lagoon dock has been moved from its usual position at the head of the lagoon to an anchored spot in the middle of the water until the start of fall, producing a space for a natural habitat to be created for the myriad of birds that occupy the lagoon as their home.

The University of California Santa Barbara Rowing Team primarily uses the dock during the fall and winter quarters, but when the dock is not in use, it is moved into the center of the lagoon where it temporarily stays during the spring and summer.

“We move the dock away from the shore in the spring and move it back in the fall,” Natural Areas Director of the Cheadle Center for Biodiversity and Ecological Restoration Lisa Stratton said. “It is currently attached to cables and large anchors where it is floating in the middle of the lagoon.”

Although the lagoon is for the most part only used by the crew team, some students would rather have the dock remain where it is than be moved into the center of the water. It is seen as an eyesore for many San Miguel and San Nicolas residents as well as other students passing by. There are also some arguments that it is harmful for the environment to have it out drifting in the center of the lagoon.

“I don’t think it’s harmful to the environment at all other than it being an eyesore,” first-year environmental studies major and San Miguel Environmentalist Awareness Chair Jonathan Ting said. “It’s not leeching any toxins or anything of that sort. As long as it doesn’t get out into the Pacific where it can break up, I don’t think it’s that big of a problem.”

Others consider it detrimental for the birds and other animals that frequently visit the dock near the shore because now they don’t have a key resting spot. Many birds including pelicans, ducks, cranes, herons and others big and small inhabit the lagoon during the year and it seems that not as many have been spotted recently.

“I always walk by the lagoon and I like to see the birds at the edge of the dock and now they’re not there,” first-year Chicano studies and biology double major and San Miguel resident Carmen Mares said. “I saw the dock floating around far away and think it should be put back because it became part of the birds’ home. It also makes our school look better and well-kept if the dock is in place instead of floating in the middle of our lagoon.”

According to the Campus Lagoon Bird Survey Summary Report taken this past March, there are on average 50 bird species that are seen per survey with a total of about 104 to 117 species seen over the course of a year in the lagoon area due to seasonal changes in the bird use. The
lagoon and island inhabits the many birds on a seasonal basis with the highest numbers of occupants during the winter season and the lowest during the summer.

“The island works for pelicans, double crested cormorants, great egrets, snowy egrets and great blue heron as a resting spot,” Stratton said. “When we first created [the natural habitat] and were able to use it year round we made a big effort to put sand on it and drift wood, back in 2006, in order to see if we could get Least Terns to nest there, but the larger birds took a strong liking to it very fast.”

Even though some are opposed to the relocation of the lagoon dock, it generates a more natural habitat for the wildlife that call the UCSB lagoon their home for the majority of the year. The dock will remain anchored in the center of the lagoon until the beginning of fall quarter when it will be of use once again.