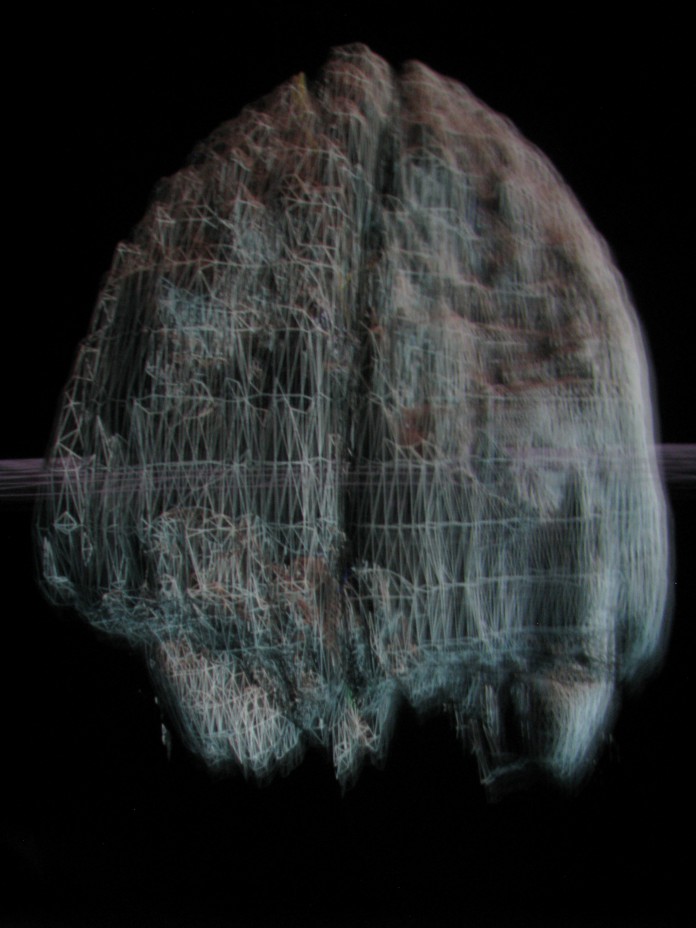 “This is kind of like where video gaming meets high-performance computing,” said Dr. JoAnn Kuchera-Morin as she led awestruck onlookers through the AlloSphere, a virtual environment housed in University of California Santa Barbara’s Elings Hall.

The AlloSphere, which is a product of 26 years of Kuchera-Morin’s research and labor, is a spherical, three-story anechoic chamber that uses multiple projectors, speakers and a super computer to visually and sonically represent data. The multi-sensory display that characterizes the AlloSphere is derived from complex mathematical algorithms mapped by Kuchera-Morin and teams of researchers, and has been.

Kuchera-Morin conceived the multi-million dollar project over two decades ago in hopes of creating a content-driven multimedia environment never seen before. Besides recently receiving part of a $200,000 grant from the Robert W. Deutsch Foundation to further the growth of the AlloSphere, Kuchera-Morin has also spoken at the TED Conference about the AlloSphere’s capabilities and contributions. Aside from her research, Kuchera-Morin is a composer and professor at UCSB and has been studying media systems for most of her career.

“It’s been 27 years of my research in media systems design, and I’ve been building media systems with my colleagues here at UC Santa Barbara since 1984,” she said.

The massive AlloSphere, which has a 30-foot diameter and is contained in a three-story cube, is a significant demonstration of Multimedia System Research in and of itself.

“The thing that we do is not only do research on the side of content, but on the side of building media systems,” Kuchera-Morin said. “It’s always a partnership between letting the content areas drive how we are going to design the system, but building the system that’s never been built before in the world.”

She notes that there are critics who question the size of the AlloSphere, and says that a lack of understanding about the system is what fosters concerns.

“That’s why I always get questions of ‘Why is it so big?’ and ‘Why can’t people sit in front of some little terminal and do the same kind of visualization that you are doing?,’ and they forget the fact that it’s about building integrated multimedia systems,” she said. “That means that you are going to have altogether in one: instrument, human and computer interaction, system design, digital signal processing [and] visual and audio information.”

The AlloSphere is not merely a demonstration; it offers an immersion of a highly complex mathematical visualization and anatomical data that would be frustrating for scientists to explore otherwise.

“It’s also been designed on the content side in order to enable multi-users to be immersed in their data; [they must] be far enough from their data to see patterns in the information in large scale, and be close enough to the data to be immersed in it. From my research in spatial environments, ten-meter-diameter hemispheres seem to give the most immersion,” Kuchera-Morin said.

It is the unique environment of the AlloSphere and the programs it proffers that has given researchers an all-inclusive perspective in multiple fields, such as quantum mechanics, biology and anatomy, to name a few. One program flies viewers through the blood tissue of a human brain to study the brain’s reaction to beauty. As viewers travel through a geometric landscape of brain matter, small rectangular-shaped computer programs sing frequencies that correspond to higher and lower blood density levels.

“These are 256 2D slices of functional MRI Data. It’s my colleague’s brain,” Kuchera-Morin pointed out during a demonstration. “He [was watching] a video and registering his blood density level every time he saw something he thought was beautiful.”

Another broader, anatomical program allows viewers to virtually shrink to the size of a blood cell and travel through pathways of arteries in a human body. The same program allows them to observe nanoparticles that destroy tumors of the liver and pancreas without harming healthy matter.

“The tumor and the particles are animations. Everything else is real. Pretty soon we’ll have the mathematical constructs to allow us to simulate tumors any place in the body as though they were really being grown, and have the geometries of the nanocell particles so that we get the right flow,” Kuchera-Morin said.

“Artificial Nature,” a third notable program, “immerses” viewers in a 3D fluid dynamic solution composed of biogenetic algorithms that exhibit colorful, organic molecules. Participants can observe geometric, sprite-like butterfly creatures procreate and die according to the nutrients they are able to gather from the (closed) system shown, transforming biological knowledge into art.

A fourth program projects a single hydrogen atom in front of the viewer and models the time-dependant Schrodinger equation as rapid waves of light model electron flow, and white dots model a probability wave of the electron’s position. Several more programs illustrate electron activity at different orbital levels. In addition to the plethora of programs, Kuchera-Morin says that the AlloSphere can potentially represent data from any field of science.

The AlloSphere will be featured in the annual Media Art Technology End of Year Show “Bits and Pieces” on Tuesday, May 29 from 6 to 9 p.m. Those in attendance will have the opportunity to tour the instrument, which is rarely exhibited because it costs about $3,000 an hour to run.

“We’ll have all of our labs open and all of the Ph.D.’s will be exhibiting their work. We’ll show the AlloSphere as well. We’re anticipating hundreds of people,” Kuchera-Morin said about the annual display.

Judging by the originality, influence and revolutionary output of the AlloSphere, that prediction doesn’t seem too surprising.