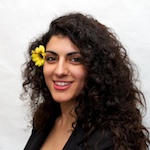 Why do you want to be AS President?

I want to be an advocate for really transforming Associated Students. The climate is very exclusive, it’s very disconnected even within the association. It’s really about time someone who is a great facilitator in the office of the President that brings all aspect of the student community. Another aspect to my qualifications is my really invested and active involvement in student organizations. I think that’s what an AS President should do. They should be up to date, day by day, and the reality is our representatives aren’t even showing up student events, let alone organizing them. That’s really a problem and the reason you see such a disconnect with people not feeling a part of the Association.

You shouldn’t just see your representatives during elections. I’ve been very active inside and outside AS and that’s what we need, we need a holistic perspective for the AS President’s office.

We need to start highlighting the amazing resources and projects that come out of AS and actively engaging students. Easy things like breaking down what AS has in a very easy and coherent way, connecting the committees and making them work together on projects. Creating forums where people can actually voice what they want AS to work on, I think that would be a great thing for students. Utilizing resources that we already have, for example like The Bottom Line, and making sure students know what’s going on, especially even in my office. You’re not just going to see my face in elections. You’re not going hear what I have to say about critical issues just during elections. I’m here everyday in and out passing out fliers and that’s what I want to keep doing.

In terms of student apathy, I’ve said this before: I don’t believe that students don’t care. I think that’s very insulting to students, I think its very disempowering when they consistently hear from their representatives that students are apathetic and student don’t care, I really don’t think that’s the source of the problem. Why do student want to get involved? That’s the question we should be asking ourselves, and are we being effective with that? Really, I think again it means actively engaging students on every level at this campus and that’s going to take climate change in the Association.

What will you do as President to address continued state divestment from higher education and subsequent rising UC tuition?

I’m an organizer who has consistently tried to outreach to students to learn about the fee increases and the privatization of our public education system. I feel it’s vital student even know what’s going on. One thing I’d really like to do is third or fourth month in office is do a huge teach-in in Campbell Hall and have different staff, professors, union workers and students come and attest to their experience and also break down some of the basic facts. I did this my first year and it was extremely successful.

We have no say in the UC Board of Regents at all and I will be an advocate for regent reform. I want at least three student voices and I think we can make that happen. There is a three-tiered problem from budget cuts and there is a three-tiered solution. Its at the state level, its at the UC Regents level and its at the campus level, like Chancellor Yang. I’m just going to be an advocate and I’m actively going to create a coalition of students to pressure all these sources of power.

What will you do as President to defend student organizations?

I will defend organizations as I have in the past. When different organizations, especially based on their identity, are targeted by outside forces, I’ve been there. I’ve been at the podium at legislative council telling asking where are you? Why aren’t you representing us? I will consistently be a voice in Associated Students that’s very critical in a healthy way but also very constructive in the real tangible solutions we can have.

How do you plan on creating a fair and honest budget that will keep AS financially sound will simultaneously ensuring the reach and impact of the association?

The fact that we are now paying for the employees that are advising us is ridiculous. The university should be paying for university employees and I will address this on day one. I think we can streamline the budget. I think we can be effective with resources and I really want to say this a hundred times over – money does not equal impact in AS. One thing I’d really like to do is in my first weeks in office I’m actively going to do org. raps and class raps to get a budget forum up on the table, to ask student to actually give input about where should this money be going. I think largely if you ask students, they don’t want it to go into executive pockets. I think they want it to go to student services. I think having student more involved in this process is where we find the answers.