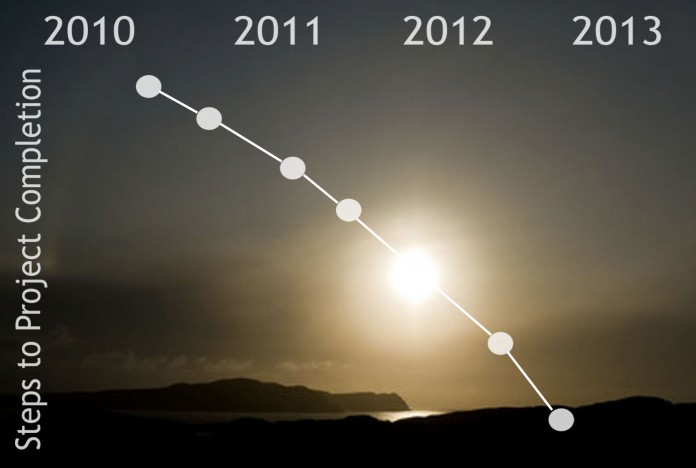 The Division of Student Affairs at University of California Santa Barbara is currently awaiting the finalized design for the largest renewable energy project yet, a photovoltaic array of solar panels to be built on campus in order to make headway on its construction atop Parking Structure 22. Initiative and funding for this production was generated entirely by UCSB students, displaying an unyielding commitment to creating a sustainable, more environmentally liable campus.

Even though the cost of fossil fuel energy continues to rise, the UCSB budget allocated for energy use remains fixed at $1.2 million. Over the past two years, the campus as a whole has used less energy than previous years, however the University still relies on coal and other types of non-renewable energy sources to fuel its utilities. By 2016, the cost of fuel will almost certainly have surpassed the school’s budget for utility use and will force Student Affairs to compensate by retracting funds from other student services, like the Recreation Center. As a solution, the Division of Student Affairs and the Alliance to Save Energy’s Green Campus Program have initiated the Zero Net Energy campaign with the goal for the campus to eventually produce enough renewable energy to offset total energy use. The solar panel array will be the first major renewable energy project UCSB has seen, and will provide momentum for the school to invest funds in future installations.

“These new Photovoltaic installations are baby steps toward a post-fossil fuel era which will come at some point no matter what,” said Bill McTague, the executive director of Resource Planning, Information Technology and Sustainability.

In 2010, students voted for the Renewable Energy Initiative, adding $6 a quarter to their fees for a span of 10 years to amass over $3 million exclusively for the purpose of actualizing sustainable energy projects. During his junior and senior years at UCSB, Clayton Carlson, 2010 graduate and current assistant resident director partnered with Michael Hewitt, also a 2010 alum from UCSB, to gather 5,000 signatures and campaign throughout campus to successfully gain enough student support of the initiative via lock-in fee. According to Carlson, the majority of the students already backed the movement towards increased sustainability, but as recent budget cuts greatly increased tuition and fees, the more conservative minded students still had to be swung.

“We reminded [students] that although you are having to spend a little more money now, [renewable energy] ensures financial stability in the long run,” said Carlson, “the value of the [solar panel system] actually grows as inflation continues and the cost of energy increases.”

Included with the lock-in fee was the creation of the Student Service Renewable Energy Initiative Governance Board that Carlson continues to participate in as an advisor. The REI Governance Board consists primarily of students representing a variety of campus organizations, but also involves administrative advisers. The board conducts meetings to make informative decisions on the handling of the money accumulated from the REI student fee.

Bill Shelor, another advisor for the REI Governance Board and the Sustainability Planner for the Division of Student Affairs at UCSB, acknowledges a strong student advocacy for increasing UCSB’s sustainable potential. Because the funds for the PV array come entirely from student fees, the students literally own the energy that the solar panel installation will produce.

“There’s no third party that is charging anyone for anything, that’s what makes [this project] remarkable and different,” Shelor said.

If all goes as planned, the construction of the PV solar array will begin within two months with a proposed completion date of January 2013. Currently, next in store for the project will be receiving a bid from one of the many contractors analyzing the design in order to determine the cost and materials for the installation’s construction.