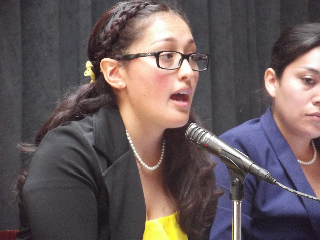 Transparency and responsibility took center stage during the Associated Students Internal Vice President Forum on April 11. Guadalupe Ibarra of the Democratic Process Party and Mayra Segovia of the Open People’s Party answered questions and presented their views in an open forum designed to introduce Ibarra and Segovia to the University of California Santa Barbara student population.

The forum began with an open question about what each candidate viewed as the largest internal problem faced by Associated Students. Ibarra began with a focus on the lack of transparency and openness among the association.

“I’ve had people express that the senate this year isn’t as welcoming,” said Ibarra. “I want to work on making sure that people feel welcome in the senate meetings weekly and that they’re able to approach me and speak to me on any issues…We would like to reclaim that the association is a place for everyone and they should feel welcomed.”

Segovia agreed that accountability was a large problem, but focused on the budget issue, including the payment received by AS members as well as a general lack of funds.

“The biggest problem internally in Associated Students is definitely the budget,” said Segovia. “Without money, great events outreach and whatnot cannot continue and I feel like that is necessary to the students here at UCSB as a whole, not just in Associated Students. Honoraria consuming more than 50 percent of our budget is ridiculous… Honoraria is not an entitlement; it is a benefit.”

Continuing the theme that unity is a key component to a functioning AS, the candidates had similar ideas on how best to solve the internal arguing that occurs during legislative council meetings.

“I plan on expanding more on the fall retreat because I believe that is a crucial starting point,” said Ibarra. “Really bringing it back to we’re all students and representatives trying to work on similar issues, maybe in different ways, but we’re all trying to make this association better.”

A question was asked during the forum regarding a general distrust of Legislative Council and AS felt by the student body. Segovia said the distrust was due to a lack of knowledge and information.

“I feel like the students feel like the Association isn’t doing much for them because they don’t really know what’s going on,” said Segovia. “They’re just not well informed as to what Associated Students does, what it can offer.”

Ibarra focused on the Legislative Council itself, highlighting a potential reason behind why it’s viewed as untrustworthy.

Tuition and the cost of education arose as a heated topic.

“I’ve heard personal stories of students,” said Ibarra. “They have to make the decision to either stay and continue their education or go back home and support their family… That’s something that doesn’t just fall on the UC Regents. It’s a California issue. It’s something that we need to make students aware of so they know who to talk to and where they need to put their energy into.”