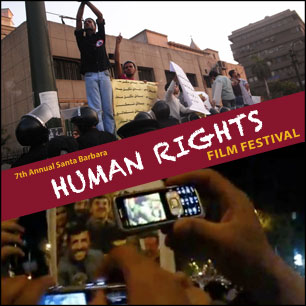 “Fragments of a Revolution,” a documentary that screened the evening of Wednesday, April 11 as a part of the Human Rights Film Series in Pollock Theater, goes beyond conventional news reporting to expose the protests that followed the highly disputed 2009 Iranian presidential election.

The director, who has chosen to remain anonymous, is depicted as an Iranian citizen living in exile. Using furtive techniques, he collected footage of the “Green Revolution” protest movement, an outbreak following Mahmoud Ahmadinejad’s unexpected presidential victory. He did this by compiling videos from covert reporters within Iran, intent on exposing these controversial protests to the world.

The documentary essentially consists a compilation of footage from multiple undercover journalists filming throughout Tehran, until their story lines congregate when the turmoil of the 2009 elections unite them in protest. These videos highlight raw footage of police brutality: images of random shootings, window and car bashings and mothers mourning the loss of their children.

The director, who followed these anonymous videos religiously, claims to feel as though he was living in a virtual Tehran for the several months it took him to produce his documentary. Between the slew of anonymous videos sent to him, he reflects on the grotesque acts of the militia and the ambiguous, disappointing speeches made by his formal leaders.

Since most international reporters were banned from the nation, and the government strictly regulated local reporters, most occurrences of the “Green Revolution” were consequently not recorded. At one point, within an undercover video, one journalist states, “Once the police are gone, we’ll attack the cameraman.” The point of kidnapping the cameraman would be to expose the atrocities of the demonstrations to the world, since the news reporter’s camera is able to broadcast internationally.

The documentary also depicts the inherent struggle of Iranian citizens who felt cheated out of “the vote of the people.” Mir-Hossein Moussavi, the runner-up in the presidential election, was exalted as a renowned leader to the people. Videos within the film present thousands of voters lined up shoulder-to-shoulder chanting, “Moussavi, restore our votes!” Militia, who randomly shot at groups of protesters, shut down these demonstrations. This brutality was also proclaimed to not be under Ahmadinejad’s supervision, when he was questioned even by several nationally broadcasted radio host reporters, namely Larry King.

Eventually, the protests died down.

“My hopes have become ashes,” says the unnamed film director in a particularly poignant moment.

But under those ashes, embers continue to glow. Although the efforts of the journalists were not seen as virtuous, the spirit of the people still seems to be unwavering and stalwart. In the end, “Fragments of a Revolution” gives a close-up, realistic view of the movement through the perspective of those who it affected most.