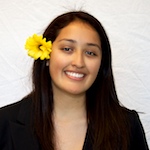 Why do you want to be IVP?

I’ve been a part of Hermanas/os Unidas, my position this year entailed being a liaison to the residence halls association, and I was invited to the res life training 3 weeks prior to starting school. It was an intensive program where they trained us on conflict resolution, time management, cross cultural diversity training, and to be safe zone certified. So, I feel that those 3 weeks really prepared me to work with different people and to promote an environment that is welcoming and safe and that can listen to everybody’s ideas and perspectives to make for productive meetings. I want to be IVP because in my experience this year I’ve seen that there are different areas that could be improved and expanded on, like the Fall Senate retreat could be a time when we come together and bond as individuals so we can carry our work out together throughout the year. Also, outreaching to the students who don’t know about the association because there are a lot of students who don’t know that they pay into it. They don’t know the fees go into different programs, so I want to outreach by making that a top priority, I’d have someone on my staff establish a website and have that updated weekly so there’s transparency and accessibility to the student representatives.

If you had to choose one issue at UCSB that must be attended to immediately what would it be and what policies would you promote to solve it?

Well, currently the thing I see right now is elections, and how elections are working b/c it takes out a lot of time and energy from the students that are running, and I feel that we could use that energy to outreach to students instead of focusing on the parties and on the people running. We could be going door to door in the residence halls and in IV, letting students know that they are able to participate in the association, that there are outlets for them, there are BCCs they can take part in. I feel that elections is a dark moment in the association, again, because it takes away from what students can be doing to help each other. I don’t even know if it should be a policy, it’s just something that should be done by the students reps that want to be in office next year, that they’re getting the word out. I guess by going through liaisons and going thruough the elections bill and having lines that incorporate elections committee where they also go out during elections. Also, putting in that parties would also have to give information about the association and not just the parties and their platforms.

How do you plan to bridge students’ issues in Isla Vista with campus issues?

I think it does because there is the population that commutes but there are a lot of people that are in IV, so it’s important to get to issues like lighting and environmental issues like there being so much trash after the weekends, and Deltopia, and different events that effect IV. One of the EVPLA candidates wants to try to get a farmer’s market, so bringing it back to the community and encouraging more local things. Promoting that local aspect and reaching out to other offices should mean we can go into IV instead of staying on campus and doing office hours there. Maybe we should be doing more monthly things to promote a strong IV community, because I know a lot of students come to campus and then go back to IV and there’s nothing in between. So, establishing that community in Isla Vista is something that’s very important.

Are there ways in which you think AS is currently wasting money and how would you solve it?

I think one of the big things that I see is that there’s a lot being spent on food. So, cutting back on how much food is being bought and working with EAB, since the green bill was passed, which says that 50% of all AS food needs to be bought from local sustainable sources. Hitting back on food, it’s used to bring people in, but if you use that money all quarter, you’re taking away from different events for students. So, setting a line item on food spending would help bring that cost down.