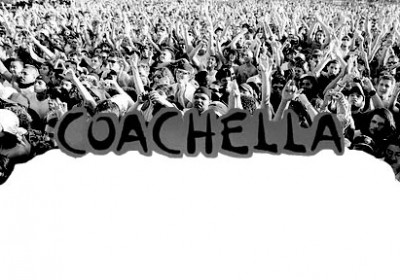 For two consecutive weekends, April 13-15 and April 20-23, people flocked to the Empire Polo Fields of Indio, California for one of the most popular- and incredible- arts and music festivals in the world.

Weekend one did not fail to live up to that reputation.

Arriving just in time for “The King and All of his Men” and “Lions in Cages” at the end of my beloved Wolf Gang’s set was the best possible way to begin the Coachella experience. If there’s one feel-good band to listen to in the sunshine, they’re it. Breakbot, the French DJ most known for “Baby I’m Yours,” followed with a less-upbeat-than-expected performance, but GIVERS rocked one tent over with their hit “Up, Up, Up.”

Next, Yuck, an indie rock band from London, played the entirety of their 2011 self-titled debut album, to little effect. It’s painful to report their lack of stage presence resulted in a disappointing performance from start to finish.

For one of the first times in Coachella history, cold and windy conditions overtook the desert sky, and attendees shuttled from the festival to camp tents.

If there is any band I could count on to save the day, it’s WU LYF, and save the day they did indeed. Their songs “L Y F” and “Heavy Pop” were both crowd pleasers, but “We Bros” was the ultimate highlight. Lead singer Ellery Robert’s infamously hoarse and husky voice was even more impressive live than when blasted through my headphones. If you didn’t know WU LYF before the festival, you will want to know them now.

The Rapture was the next well-established artist to put on a show that well surpassed my already high expectations. If fans were looking for a dance party, the Mojave tent was the place to find it- thanks to a saxophone, cowbell and the spectacular “House of Jealous Lovers.”

That said, Steve Angello, Axwell and Sebastian Ingrosso, the three collaborating DJs that make up Swedish House Mafia, certainly did bring the intensity and volume; they also brought the drugs, the energy and the pyrotechnics. Opening with their newest release “Greyhound,” it was apparent the performance would be as aesthetically insane and bass-heavy as Tiesto was in the same spot, just two years previous. And you’d better believe the crowd went nuts as their remix of Florence and the Machine’s “You’ve Got the Love” transitioned to “ONE” to Goyte’s “Somebody that I Used to Know” back to “ONE.”

My Saturday afternoon kicked off with the return of sunshine, We Were Promised Jetpacks and We Are Augustines. Grace Potter and the Nocturnals were a pleasant surprise of fun before the atmosphere took a wild turn. That consisted of a ride on the ferris wheel, The Shins, Feist, another ride on the ferris wheel, Bon Iver, SBTRKT, Radiohead, Kaskade and a Radiohead encore. Talk about five amazing hours.

Feist’s perfect vocals, accompanied by a 16-piece ensemble, proved nothing short of incredible. The artist played songs from her newest album “Metals.” One viewing of “How Come You Never Go There” was confirmation enough that Leslie Feist defines a class act. ??

Bon Iver, the best new artist Grammy winner, modestly took the main stage and opened with “Holecene,” ended with an acoustic “Skinny Love” and sang nothing in between that was anything short of amazing.

And then, just as Arcade Fire did one year previous, Radiohead took the main stage and changed my life. It was truly a performance where the music fully consumed listeners. The moment “Karma Police” ended, the entire crowd continued to sing the chorus, until Thom Yorke joined in; it is a moment in time I will remember for many years to come. Their double encore is just another purveyor of why the Coachella experience is something music lovers dream about year round.

And then, just like that, it was day three. Welcome to Sunday- a day for the record book.

I’m proud to report Gardens & Villa, an indie-rock band hailing from Santa Barbara, proved why they deserved a spot on the lineup. Oberhober, First Aid Kit and Lissie were all lay-in-the-grass and feel-good artists, and Metronomy’s 40-minute set on the outdoor stage was effortlessly enjoyable as they played well-known songs off of their 2011 album “The English Riviera.”

The next stop seeing Santigold on the main stage was one of the weekend’s highlights for me. Giving off the coolness of M.I.A. and the wild, yet appreciated fashion sense of Nicki Minaj, she played an energetic and fun set. She even invited fans to dance with her on stage for “Creator” while yelling out, “We’re having a party up here!” Running to the front row alone rather than chilling on the sidelines is something I would recommend to anyone who has the privilege of seeing her in concert.

Abel Tesfaye of The Weeknd drew one of the largest crowds to the outdoor stage when he played songs from his three mix tapes “House of Balloons,” “Thursday” and “Echoes of Silence.” Fans were mesmerized by his emotional lyrics, to say the very least, and the beautiful Indio sunset made for the perfect backdrop during one of the most enjoyed sets of Coachella.

The EDM genre was readily apparent throughout the festival and French duo Justice proved why. With heavy synthesizers and an extravagant light show, the DJs with darker beats put on one of the most dance-worthy performances I was fortunate enough to experience. While I’ve never been a huge fan in the past, Justice dominated the main stage and I became an instantaneous convert. Then Girl Talk kept the good vibes going as his mash-ups transformed the outdoor stage into one large dance party: balloons, confetti, you name it.

And then there was Florence. Florence was strikingly beautiful, unfathomably talented, and a goddess among humans. In her flowing, black dress, Welch twirled across the stain-glass decorated stage and belted intoxicating vocals. The performance is something I could only describe as pure magic. “This is for everyone who had an amazing time this weekend, and doesn’t regret a thing,” she shouted to the audience before “Shake it Out.” However, “Dog Days Are Over” was the ultimate captivator. From beginning to end, the 45-minute set was nothing short of absolute perfection.

And a final note: I don’t need to tell you Dr. Dre & Snoop Dogg were there, or that Tupac made an appearance, but I will report the hype around the hologram wasn’t over-exaggerated in the least. It really was that cool. Regardless of if Coachella attendees were there for the indie, the electro, the reunited or the Weeknd, each seemed to sing and move like they were a more die-hard rap fan than the next. But then again, who doesn’t want to stand up with the real Slim Shady?