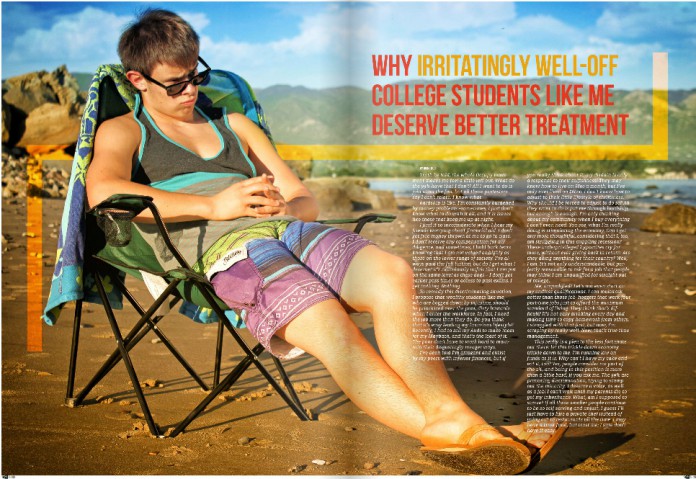 The newest student publication on campus, Campus Point Magazine offers a new periodical separate from the Nexus and The Bottom Line, both of which are in newspaper format.

Instead, Campus Point will be a 90-plus page color magazine with special articles geared toward giving advice and information to student readers on social and educational topics around campus. Issues will also offer pieces written by various faculty members, giving an administrative point of view about student life.

Founder and Editor-in-Chief Corey Lau explains the content of the magazine as “a bullet guide to life on campus.” Some of the article titles read “10 Most Enriching Classes,” “The Death of the Party Scene,” “15 Places to Study Other Than the Library” and “Secret Recipes of the Dining Commons.” These and other features offer advice on study tips, social life, and how to be healthy at University of California Santa Barbara. Complementing these articles are vivid and colorful photos that help illustrate each topic. In future issues, Lau also hopes to add pieces written by professors.

“Our ultimate goal is to bridge the gap between faculty, students and student government,” said Lau.

The idea for Campus Point came in the fall quarter when Lau, a second-year film studies major, decided to mix his excess free time with his love for magazine journalism. Since then he has put together a staff of around 50 people who now meet weekly to help complete the publication. Lau says that the organization is “about as independent as a child’s lemonade stand” meaning that its funds do not come from the school but rather advertisements from local businesses.

“Our magazine is not meant to compete with the Nexus or The Bottom Line, rather it will act as a complement to them,” said Lau. “The difference, though is that we hope that our articles will preserve the relevance of the magazine as long as possible, whereas newspapers will become irrelevant once a new issue comes out.”

The first issue is set to release around the fifth week of this quarter. It will be free of charge. For the future, Lau hopes to release an issue at the start of each quarter. The organization has already started on an issue for Fall 2012.

Campus Point Magazine offers a different approach to media at UCSB and in an exciting format. All are advised to anticipate the imminent release of its first ever issue.