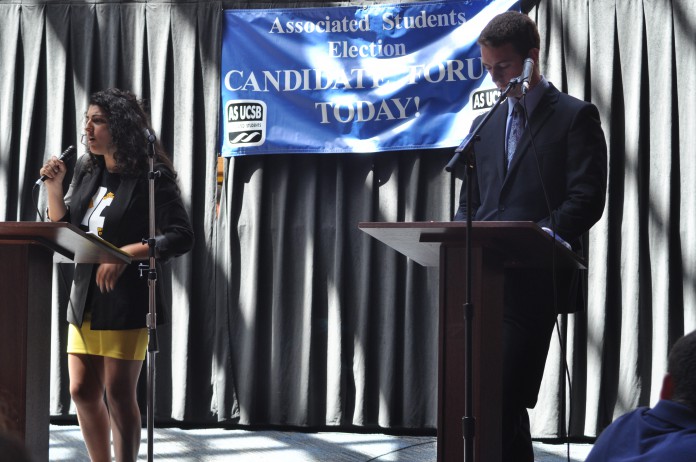 The Associated Students presidential candidates laid out their vision for the future of AS and the University of California Santa Barbara to students and faculty during a moderated debate held in the Hub on Tuesday.

Democratic Process Party nominee, third-year political science and global studies major Sophia Armen, squared off with Open People’s Party candidate, third-year philosophy major Nate Walter, over a wide range of issues including crashing classes and engaging minority groups and the Greek community, but the debate focused largely on strategies to address student apathy and the new UC Office of the President Tax on UC campuses.
Unlike last Thursday’s presidential forum where candidates were given two minutes each to field questions, in Tuesday’s debate Armen and Walter were free to answer questions and refute their opponent’s stance on certain issues, which gave more insight in how each candidate would approach the office should they be elected.

As student disinterest in the Association proves to be a persistent issue for presidential candidates, both nominees were asked their plans to combat apathy towards AS.

Walter said he has made attempts in the past to raise awareness about AS and increase student involvement by utilizing media relations to create a unified advertising agency, but this proved redundant.

“Apathy comes from class work,” said Walter. “Students are students first and that consumes a lot of time. Having an extracurricular that’s considered a job in AS doesn’t seem that appealing. What I’d like to do is break down these larger issues once again and make them into smaller things and rationally explain to students why they should care, why they should be pissed off about certain things and how working in AS can be a very rewarding thing.”

“I don’t think that students don’t care,” said Armen. “I think that’s a really big problem in our Association, we blame students for not getting involved. The reality is students do care, they’re just not being told why they should care or how these issues affect them. That’s what representatives should do, that’s what defines leaders.”
Armen said she would increase student involvement by forcing elected student leaders to attend more student events and said she would make it mandatory for members of AS Senate to attend at least two different Office of Student Life organization meetings per week.

“Creating community is about breaking apathy, it’s not about anything else,” Armen said.

Regarding the UCOP tax, which would levy a new 1.6 percent tax on, among other things, all student initiatives and referendum on the AS elections ballot, Walter was hesitant to lay out concrete plan to address the UCOP and said that the university was still negotiating how the tax would actually be implemented.

“It’s important to work administration to ensure that students are the least effected,” Walter said. “Once we know what to attack we will attack it and I will do my best to resolve this issue and mitigate its effects.”

Armen called the UCOP tax unbelievable and inherently wrong, and rebutted Walter’s claims of uncertainty surrounding the tax, citing that when UCOP Executive Vice President for Business Operations Nathan Brostrom visited UCSB this past Monday, Brostrom made it clear that UCOP plans to move forward with this tax.

“I will work in full force to ensure every aspect of this campus understands they’re being unfairly taxed on things they didn’t even have a say in,” said Armen. “We would have to make some kind of united front and that means going out to organizations and actively unify students and making them understand their money is going to operating fees – to paying salaries.”

Walter responded to Armen by pointing out that he has already taken steps against the UCOP tax by helping pen the student bill of rights, which attempts to protect students from retroactively being taxed.

Students will be able to cast their vote beginning Monday April 23 by signing into GOLD.

Keep an eye out for TBL’s Elections Issue coming this Monday, which will feature Q & A’s with each executive candidate.