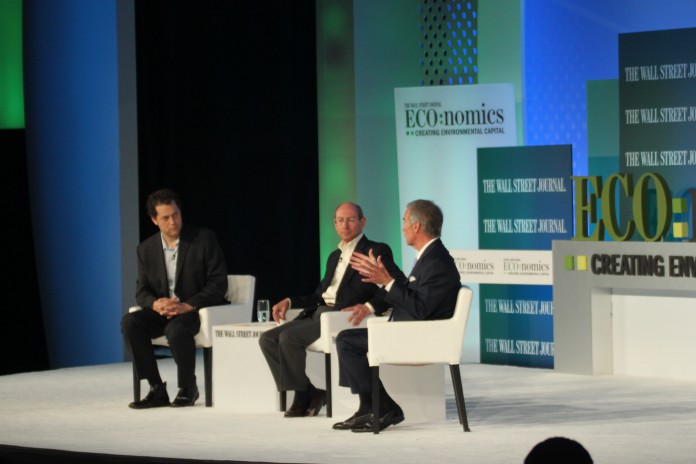 Following the one-year anniversary of the nuclear meltdown at Fukushima, Japan, energy entrepreneurs convened at the Wall Street Journal’s ECO:nomics conference to discuss the future of nuclear energy in the United States and the world.

As of December of 2011, Southern Company, one of America’s largest generators of electricity, began construction on two new nuclear units that are expected to be delivering commercial power by 2016 and 2017. These represent the first nuclear reactors allowed construction permits in the last thirty years and have caused public concern, particularly after the devastation in Japan.

Aris S. Candris, the president and CEO Westinghouse Electric, believes that it was a failure of design, not a failure of nuclear power itself, that caused the devastation of the Fukushima plant.

According to Candris, the new reactors have systems in place to ensure they remain cooled for at least seven days, eliminating the potential for a repeat of the Fukushima disaster. Though the safety procedures and precautions have been revamped, bad public image and a worry that the benefits don’t outweigh the risk have severally stalled nuclear power in the United States.

“In the U.S., demand’s not growing fast enough,” said Candris, “So we don’t see that happening inside the U.S. China is booming with nuclear, India is next.”

James Rogers, the chairman, president and CEO of Duke Energy, supports nuclear power but does not believe it will immediately replace coal or gas, regardless of how well it’s accepted.

“We have a portfolio of ways of generating electricity,” said Rogers.

Advancements in the field extend beyond more advanced and feasible safety measures as the industry is currently in the process of producing smaller, more affordable nuclear plants.

“That is the next area we’re working on,” said Candris. “We’re taking the same concepts we have, taking them to the next level…compacting…scaling down.”

The two speakers still have hope for nuclear power in the United States and are expecting to see a resurgence of support for the technology as people search for alternative sources of energy.

“The growth and demand is fairly flat but that’s for now,” said Rogers. “A lot of environmentalist say you can’t be serious about the climate if you’re not serious about nuclear.”

Candris continued this train of thought, presenting his view on the future of nuclear energy in the United States.

“Nuclear technology was developed in the U.S.,” said Candris. “We expect that we will have a [nuclear] renaissance.”