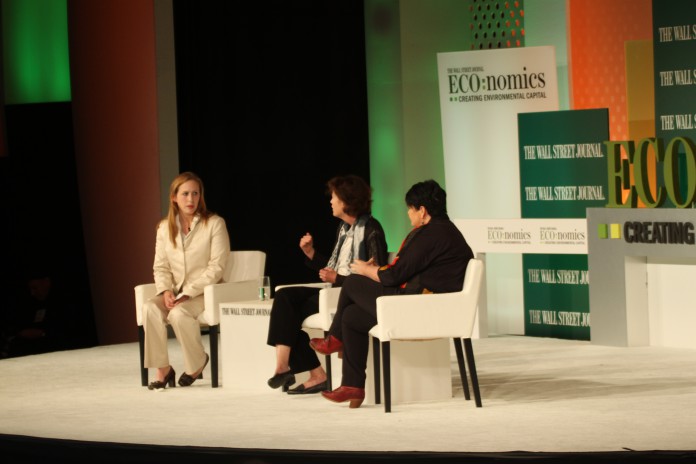 The Obama green job stimulus package and the future of environmentally friendly jobs lead the discussion between Frances Beinecke and Sharan Burrow at the Wall Street Journal’s ECO:nomics conference. The women considered the benefits of green jobs and how the industry will grow during the next few decades and further into the future.

Burrow, the general secretary of the International Trade Union Confederation, the world’s largest trade union federation, promoted the importance of cleaning up the process we as a society currently rely upon.

“Green jobs, absolutely, that’s the future,” said Burrow. “If coal is to be part of the future, they have to clean up their act.”

“There are ongoing jobs there,” said Beinecke. “They aren’t any different than mining coal [jobs]. There are a lot of jobs being created in the renewable energy sector. It is a growing area.”

The panel spent a portion of the discussion debating the benefits and risks of labeling certain jobs as green, claiming that it distracted from the necessities of creating the jobs themselves. Beinecke said society should instead be focused on increasing the availability and volume of available jobs, rather than labeling.

“What jobs do we want to create in what sector,” said Beinecke. “Without defining it as a green job.”

“The green economy’s a tagline,” she said. “The reality is if we’re serious about sustainability, than we have to clean up.”

Though they promote eco-friendly jobs, Burrows and Beinecke addressed the concern over those who work in the coal industry who may face losing their jobs should coal become obsolete. Burrow believes they need not worry, as she predicts the industry will not fade within her lifetime or well into the future.

“There will always be transitions,” said Burrow. “We’re not going to see less energy. We need to make those jobs cleaner.”

Beinecke restated that while she does not encourage the loss of anyone’s job, that fear should not detract from supporting more environmentally sustainable jobs.

“There are many, many people who need jobs,” said Beinecke. “In the clean energy sector, there are a lot of opportunities…They create jobs and we need them.”

As the discussion winded down, Burrow encouraged society to come together and cease arguing over blue and white-collar jobs.

“Human beings are extraordinary when they decided to work together,” said Burrow. “It’s got to be the future if we’re responsible human leaders.”