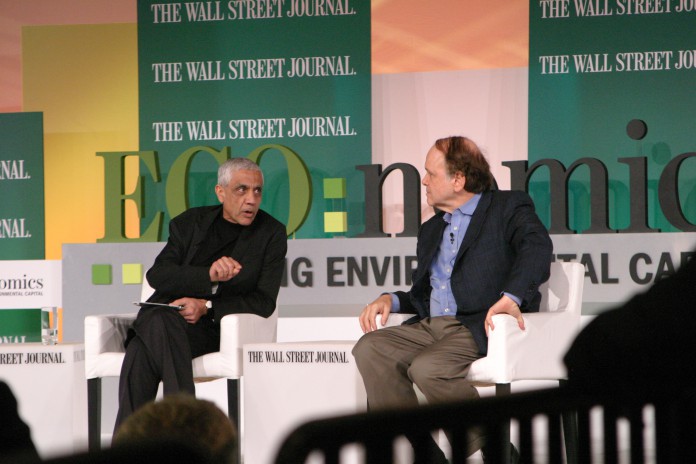 As gas prices continue to increase, there is a focus on finding alternative and economically feasible alternatives to oil. Even with this incentive, nothing has arisen as the answer to our dependence on the chemical. At the Wall Street Journal ECO:nomcis conference, Vinod Khosla and Daniel Yergin met to debate whether or not we as a society will be forever dependent on fossil fuels and if there’s a viable alternative already present.

The panelists stated that the process towards renewable energy would not be easy, especially since the recession.

“The financial crisis set us back a couple years,” said Khosla while Yergin said that despite this, “the effort is continuing.”

Efficiency stood as a key talking point, with both speakers advocating the importance of improved efficiency as society waits for a technological “black swan,” an invention that will greatly affect and change the energy industry.

“I do believe we can cut oil consumption in half by doubling the efficiency of engines,” said Khosla.

Khosla also promoted the importance of increasing lightning and air conditioning efficiency as a means of reducing our impact on the environment. Yergin commended the advancements in efficiency that have already been made throughout the United States history.

“The United States today is twice as efficient as it was in the 1950s,” said Yergin.

In regards to natural gas, the speakers remained uncertain of the best way to use the resource, whether it should be used to directly fuel items like cars or if it should be used to create electricity. Despite the uncertainty, they declared shale gas a “black swan” that severally changed the way energy will continue into the future.

As the world continues forward into uncertain energy times, Khosla believes society is severally underestimating the components that will affect our future.

AS Senate Resolves to Fundraise for the Philippines and Support Statewide...