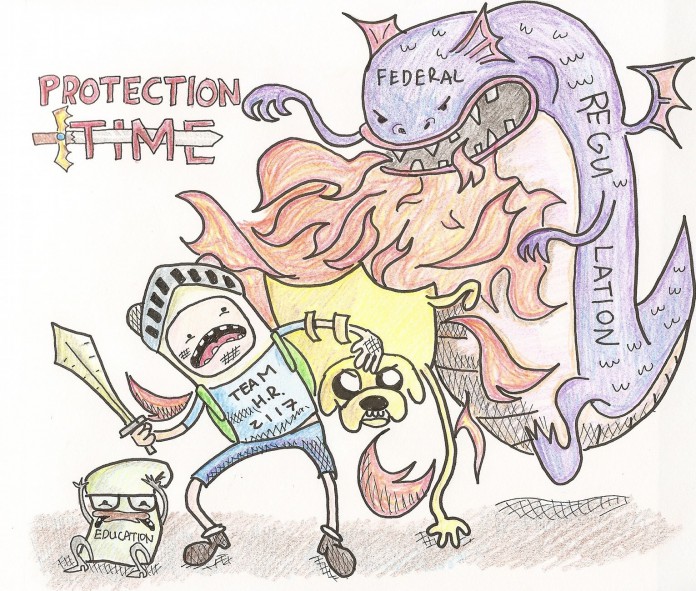 A recent bill that is moving through Congress, the Protecting Academic Freedom in Higher Education Act, has been causing much controversy on the university front. Rep.Virginia Foxx (R- NC) introduced the bill also known as H.R. 2117, last June. H.R. 2117 would prevent the Department of Education from setting a federal definition of “credit hour,” which would as a result decrease accountability within institutions of higher learning. The bill was passed in the House on Feb. 28 and is in the process of going through the Senate.

Credit hours are defined as the total number of hours of both lecture and outside work required for a class, for which students receive corresponding credits. Currently, because of 2010 education initiatives, credit hours are applied federally by the Department of Education because credit hours are connected to federal funding: the more credit hours an institution has, the more funding it receives.

“The intent of the federal definition of a credit hour was to provide some consistency across institutions so that individual schools could not inflate their credit hours in order to provide less service for equal federal funding,” said John Yun, director of the University of California Educational Evaluation Center at University of California Santa Barbara’s Gevirtz Graduate School of Education.

H.R. 2117 would reverse this, with supporters believing the definition of credit hours as created by the Department of Education infringes on the rights of individual institutions.

Yun admitted that although both sides of the issue had good arguments, there could be some unintended results of the bill if it passes.

“Past experience [with the 2010 federal credit hour regulations] may not be a good guide to future problems as new actors enter into the sector, particularly the for-profit and online institutions… many of which have demonstrated somewhat questionable recruitment practices in the past,” Yun said.

Many Republicans in Congress and higher education organizations, such as the American Council on Education, hold opinions opposite those of the Department of Education and many Congress Democrats. ACE represents all accredited U.S. higher education institutions, and in a letter to Congress stated “the definition places accreditors in the untenable position of being required to put aside the academic judgments of the traditional peer review process and instead substitute the federal government’s judgment about a critical component of the academic enterprise.”

Groups like this make the case that historically it has been the duty of the individual institution to deal with credit hours, and changing that gives the government too much control in this area.

A summary of the bill from the online House U.S. Education and the Workforce Committee, headed by Rep. John Kline (R-Minn.), voices its support for the bill.

According to this site, the federal definition of a credit hour compromises “the traditional role of institutions of higher education in order to impose a restrictive set of new requirements that could prove to be very harmful for the higher education community.”

The Obama administration supports the current federal standardization of credit hours, and as a result opposes H.R. 2117.

A press release from the administration stated its reasons for opposing this bill, explaining that it “would nullify certain Department of Education regulations that help ensure the integrity of the programs of student financial assistance under Title IV of the Higher Education Act of 1965”.

“It is likely that if it passes the Senate, the President will sign and work towards a more comprehensive way to increase accountability in the fast growing higher education sector,” said Yun.