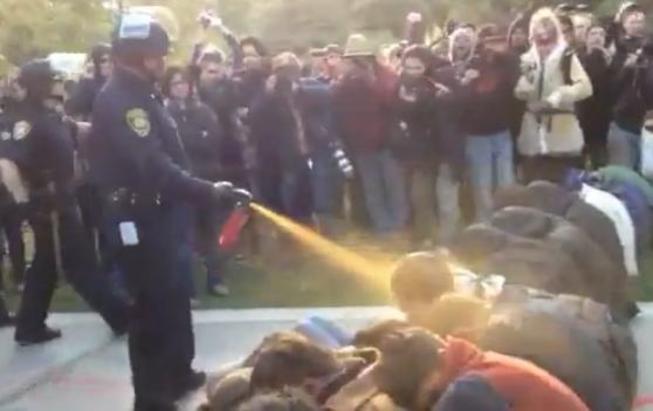 An attorney with the Federated University Police Officers Association, the union representing UC campus police and Lt. John Pike, the police officer at the center of the pepper-spray incident, issued a temporary restraining order Tuesday in Alameda County preventing the Task Force from reporting its findings to the University and the public.

“I want to make it clear that FUPOA has no problem with the report itself being released to the public,” Union President Andrew Lopez said in a statement issued Tuesday. “Our concerns are about the confidential information about our officers that are contained in the report…”

The union cites California Penal Code that says such records are confidential unless it involves investigations by a grand jury, a district attorney’s office or the Attorney General’s Office.

“FUPOA is just asking the University of California Office of the President to simply comply with the law and ensure that no peace officer’s confidential personnel matters are disseminated to the public,” said Lopez.

Task Force Chair Cruz Reynoso, a former California Supreme Court Judge and professor emeritus in the UCD School of Law, said Monday he was frustrated by the actions taken by the FUPOA.

“However,” Reynoso said, “Let me assure you that I am undeterred in my commitment to release the complete and unredacted work of the Task Force, a view shared by President Yudof.”

UC President Mark Yudof echoed the same sentiment Monday, saying he was “disappointed” by the delay and that he too was being withheld from the information gathered by the Task Force because of the court injunction.

“I have asked the UC General Counsel’s office to do everything in its power in court to turn back this attempt to stifle these reports,” Yudof said. “The work of the Reynoso Task Force is a fundamental stepping stone needed to carry the UC Davis campus past the events of Friday, Nov. 18. The entire UC Davis community deserves a fully transparent and unexpurgated accounting of the incidents in question.”

On the afternoon of Nov. 18, 2011, students partaking in an Occupy protest on the UCD campus were confronted by UCPD and pepper-sprayed after refusing to disperse. Within 24 hours of the incident, footage of Pike and another officer casually spraying an orange cloud at protesters’ heads went viral on the Internet and UC Davis quickly became washed in national headlines and the brunt of jokes by late-night television comics like John Stewart and Jay Leno. Students and activists alike decried the police action as inhumane and violating rights to peaceful assembly.

Three days after the incident, on Nov. 21, 2011 UC Davis Chancellor Linda Katehi requested that Yudof form a Task Force to look into the pepper-spray incident. Yudof in turn named Reynoso as chair of the Task Force.

The Reynoso Task Force included 12 individuals and was assisted by the Kroll group, a security and investigations firm headed by former Los Angeles Police Chief William Bratton. Prior to the restraining order, on Tuesday, the Task Force was to publicly outline improvements to police procedures, command protocols and campus policies and oversight structures to ensure that the rights and safety of nonviolent protesters and the campus community were protected.

Pike and another officer, along with the UC Davis Police Chief, have been on paid administrative leave since November.