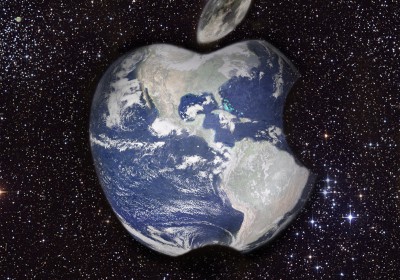 They joked the retina display the device sports outmatches the jumbo screen display they were using to show the audience, an interesting challenge to deal with in showing off the clarity. It is 2048 x 1536, that is 3.1 million pixels, the most ever on a mobile device. The new iPad has over 1,000,000 more pixels than the last generation.
Existing apps will automatically be scaled up and text will be rendered in higher-resolution.

The tapering also appears to be different. And there is still a physical home button. It also has 44 percent better color saturation than before.

There is an A5X processor meaning quad-core graphics.

The back iSight camera has a 5-megapixel backside illuminated sensor on the back, 5-element lens, IR filter and ISP built into the A5X chip. It is very similar to the iPhone 4S camera. It has auto exposure and auto focus.

The keyboard now comes with a microphone button. It now has voice dictation that supports U.S. English, British, Australian, French, German and Japanese.

iPad 3 will also come with 4G AT&T and Verizon LTE. The iPad can also be a personal hotspot, however the carrier must provide that service.

It will have the same amount of battery life.

The new device is 9.4mm thin, weighing 1.4lbs, which is slightly heavier than the iPad 2.

It is the same price as the current iPad and will be available on March 16.

Overall the iPad 3 is a faster machine with better clarity.

Apple also unveiled the new Apple TV that is available for pre-order now and to buy next week. It is $99.