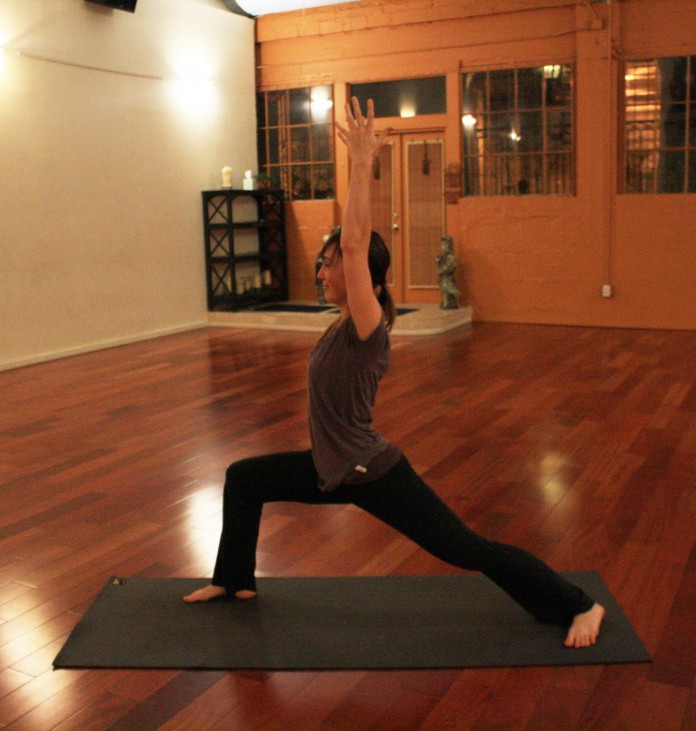 Upon entering the yoga studio, the dim light and soft hum of music radiate a relaxing vibe. Over the course of an hour and a half, Yanoula Athanassakis, College of Creative Studies Literature professor and yoga instructor at Yoga Soup in downtown Santa Barbara, guides the class through a formulated series of body movements harmonized with habitual deep breaths. The practice culminates with a resting period, where the students end supine with eyes closed in order to achieve the full benefit of the lesson.

Considering that many University of California Santa Barbara students juggle loaded schedules full of classes, work and extracurricular activities, it’s not surprising that many of them choose yoga as a way to exercise and relieve stress. According to ancient Hindu texts, the term ‘yoga’ is defined as an “evenness” of the mind. Even today, this important concept comes into play as the discipline of yoga requires physical balance as well as a focus on the relaxation of one’s thoughts.

For some, the practice transcends physicality and also stimulates a sense of spirituality. William Barnes, a UCSB geology graduate, says that he uses yoga as a supplement to loosen tight muscles that result from his other physical activities. He notes that the stretching done in a yoga practice can be an important aspect of physical well-being as long as a person doesn’t stretch beyond their own limits. Although Barnes has attended a few yoga classes offered on-campus, he prefers Yoga Soup for the more rigorous practices.

“They’re relaxing but not so physical,” Barnes said of the UCSB-sponsored yoga classes.

Depending on a variety of factors, relaxation may be exactly what some students look for. Regardless of preference, Athanassakis says that yoga attracts all types of people because of its variety of forms and applications. Many attendees of her class are recovering from injuries, dealing with anxiety disorders or are using yoga to maintain overall good health. Additionally, some look to many forms of yoga as a way to stay connected to the body, because of its intensive focus on deep breathing.

“A lot of people are searching for meaning in what they do with their time,” said Athanassakis.

In her class, she teaches a type of yoga called Vinyasa, meaning “flow,” because throughout the practice the body is constantly moving as opposed to some forms of yoga where positions are held for a longer period of time. No matter what type of yoga is intriguing to an individual, the practice can be beneficial to anyone who makes the effort.

Members of Athanassakis’ class range from ages 16 to 70 on any given day, which includes a good number of UCSB and Santa Barbara City College students. Derek Stettler, a SBCC film major, has worked at the front desk at Yoga Soup for three years, and reports a steady level of student attendees. He says that Brett Land, a yoga instructor at Yoga Soup and in Isla Vista, originally took up yoga as a UCSB student to battle the pressures of college. He personally believes yoga can assist with any ailment- physical or mental.

“I do yoga to focus and for the centeredness and sense of balance that comes afterwards,” said Stettler. He feels that practicing yoga reminds him to breathe deeply and remember the truth of what’s around him.

No matter what encourages someone to try yoga, the practice can be beneficial in all sorts of ways. Whether in pursuit of calming the mind, maintaining physical health, or simply learning something new, college students are one of the many demographics of people who practice yoga both in Santa Barbara and in Isla Vista . As a student at UCSB, the relaxation of yoga can alleviate stress and be a very satisfying hobby to use as a retreat from an incredibly busy schedule.