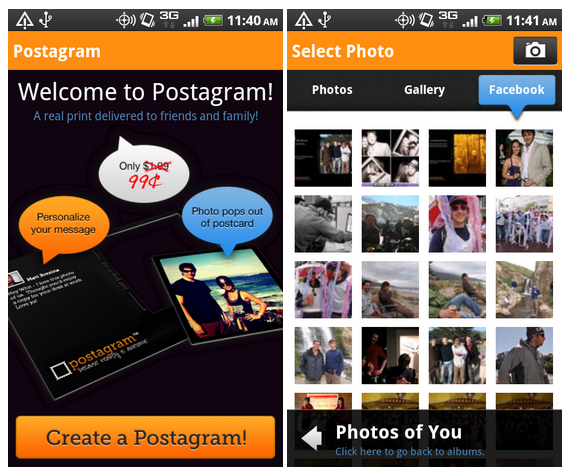 While the ability to make a call was the initial motivation for purchasing a cell phone, Apple iOS devices and their innumerable capabilities have changed the necessity of the product for many consumers. Rather than tapping into the basic abilities of their new smart-device, people chose to rip the plastic cover off of their new device and tap directly into the app store to download Facebook, Twitter, Shazam and a slew of other standard apps. However, its often the lesser-known apps that provide the most satisfaction to iAddicts.

For photo gurus, Instagram is on the radar because of its ability to edit pictures through different filters and follow other app users.

“It’s quick and easy to use, to take photos and edit them on the go, and share them with your friends,” said fourth-year communication major Taylor Lee.

However, one of Instagram’s lesser-known relatives, Postagram, also deserves a nod. At the cost of $1, users can send postcards anywhere in the world with one of the photos they’ve taken or edited through another app. It has the same happy effect on recipients as snail mail, but it’s cheaper than paying for paper and postage for the sender.

Another student pick is Gag, an app for those who always feel behind on the latest news. Gag supports offline browsing and is especially great for Rage Comics fans.

For magazine lovers, Zite is a super smart personal creator for the medium. Users pick areas of interest-such as Sports, World News and Celebrity Gossip-and have a custom magazine created. Articles are rated with a thumbs-up or thumbs-down and over time the app learns the user’s preferences, to create a customized news page.

For students, many apps have transformed even the necessity for a computer and exist to make note taking simpler. Notability is another one recommended for students and its current 99 cents sale gives it even more appeal. Handwritten or typed notes can have voice recordings, videos, pictures and charts embedded directly into them. Paper styles range from graph paper, blank and college-ruled and can be organized into categories and subjects. iTunes U boasts over 500,000 free lectures, books, and videos and even free courses. Notes and highlighting can also be done directly in iBooks.

The free app Dragon Dictation is a useful recorder that types out the words spoken aloud in a clear document. Say goodbye to lecture notes because the app records and transcribes what a professor is saying.

Pages, Keynote and Numbers are three other beneficial apps. They are the Apple equivalent of Microsoft Office with user-friendly interfaces, creative formatting and stunning visuals. The apps run for $9.99 each, but in comparison, the Microsoft Office for Mac Home and the Student Family Pack is $149.95 at the Apple Store. The only problem is that Microsoft Office is still extremely popular and people worry about switching from their typical mode of software.

“I find them exactly the same,” said fourth-year Michael Goldberg, who testifies about any difference beyond the interface.

Tablet devices are great for board gamers, too. Thanks to the iPad, Monopoly is making a comeback. Rather than lugging around the physical game, losing tiny pieces or having the banker “accidentally” short-change you, friends can gather around a digital playing board that keeps track of everything.

Having the best apps is definitely what makes the smart device experience. And for people who complain their innumerable apps are too difficult to keep organized? Don’t worry, there’s an app for that.