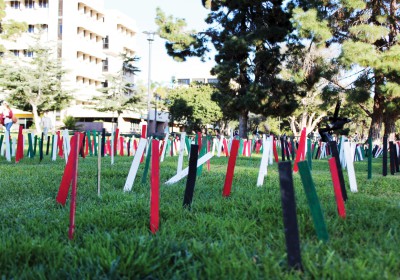 The organization Students for Justice in Palestine found their Gaza Awareness Week display vandalized with an obscenity in the early morning of Feb. 15.

On the grassy strip that runs along the bike path in between the Annex and Counseling and Career Services buildings, the group had an array of multi-colored stakes erected. When they arrived at their display in the morning they found the white stakes had all been removed and arranged to spell out “butt fuckers” in huge letters across the lawn.

According to Anisha Jivraj, a third-year biology major and member of the group, for the past four years the organization has created this display during Gaza Awareness Week to commemorate and bring awareness to the Gaza Massacre. The massacre was a three-week bombing and invasion of the Gaza Strip by Israel that happened between Dec. 27, 2008 and Jan. 19, 2009. The death count of the attack was 1389 Palestinians and 13 Israelis.

For the display, stakes were put in the ground to represent lives lost during the offense and a board was put up with the statistics. The red, green, black and white stakes symbolized the Palestinians and the blue cluster the Israelis.

“If they want to have a legitimate discussion about it we are so open to it,” Jivraj, who was one of the first people to find the defaced display, said of those who vandalized. “It’s making our cause a joke.”

Jivraj also stated she saw someone walk by and knock their sign down, which she thinks is very symbolic of the lack of respect for their cause.

Yasmin Sallak, an undeclared first-year that is also a member of the group, says the purpose of the display was to raise awareness and that, “opposition groups don’t need to silence us to get their point across.”

Given the nature of this offense it could be considered a hate crime, which University of California Santa Barbara has strict policies against, and witnesses to hate crimes are encouraged to report them as soon as possible.