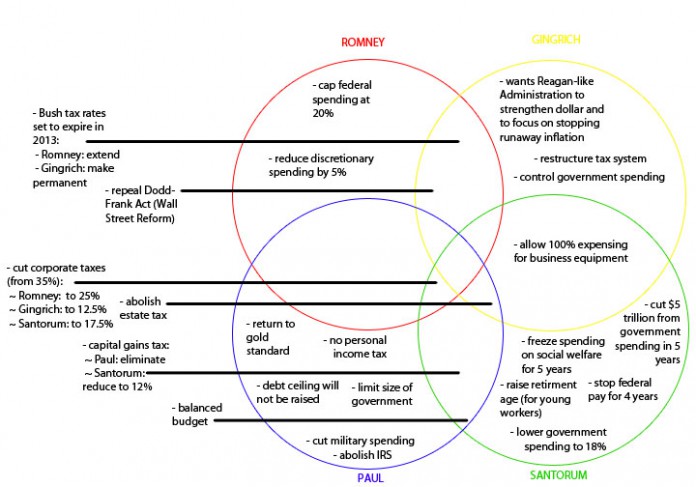 Two easy primary victories in Nevada and Florida over the past week helped solidify Mitt Romney as the presumptive nominee for the Republican Party against President Obama in November. The former Governor of Massachusetts silenced concerns of a revival from former Speaker of the House Newt Gingrich by winning contests in Florida and Nevada by a combined 44 percent spread.

As in preceding primaries, millions of dollars worth of Romney-sponsored TV and radio ads attacking rival candidates began in the undecided states weeks before the challengers even arrived. After Romney’s campaign team left Florida victorious, PBS estimated that 93 percent of the ads Romney’s Super-PAC Restore Our Future had run for weeks were centered on blasting candidates such as Newt Gingrich and Rick Santorum.

Often during the Republican campaign, Romney’s task has been to regain the majority of public support from a series of surprise challengers. Since the beginning of Republican debates for the 2012 election, candidates including Texas Gov. Rick Perry, former Gingrich and Godfather’s Pizza CEO Herman Cain have each hijacked Romney’s favored position to win the nomination, even if only for a matter of days. Consistent, however, has been Romney’s advantage in a theoretical contest against President Obama-until Monday, that is.

In a poll published by the Washington Post and ABC News, Obama fortified his lead over Romney in national public opinion by taking 50 percent of voter favor to Romney’s 39 percent. In stump speeches about the President, Romney’s campaign has limited its attacks on Obama to his policies dealing with the economic crash of 2008 and in treating the United States spending deficit.

But with employment numbers consistently improving, Romney has begun to muffle his accusations of the President’s incompetence. As long ago as three weeks, Romney admitted in an interview with conservative commentator Laura Ingraham that the economy was “getting better” under Obama. When asked if this might conflict with his message of more responsible economic policy than President Obama, Romney responded that the situation “just happens to be the truth.” At the same time, Republicans have refrained from attacking Obama on a personal level because of his popularity with the American people.

Still, one widely acknowledged risk to Obama’s growing favor is the potential for a financial disaster in Europe, which would have resounding setbacks in the United States. Despite the “Eurozone” financial crisis being largely out of Obama’s control, the President may become vulnerable to European policies, which, if they fail to remedy the European economy, would affect the global political economy led by the United States. If European states and banks lose their ability to borrow from the United States because of unpaid debts, the money required to keep trade and growth moving across the globe may collapse on Obama’s watch.

But as Paul Krugman of the New York Times pointed out earlier this week, few states in America rely on European products for their Gross Domestic Product. Only South Carolina and Utah owe more than four percent of their economies’ growth to European actors, two states that are unlikely to support Obama in November regardless of what happens.