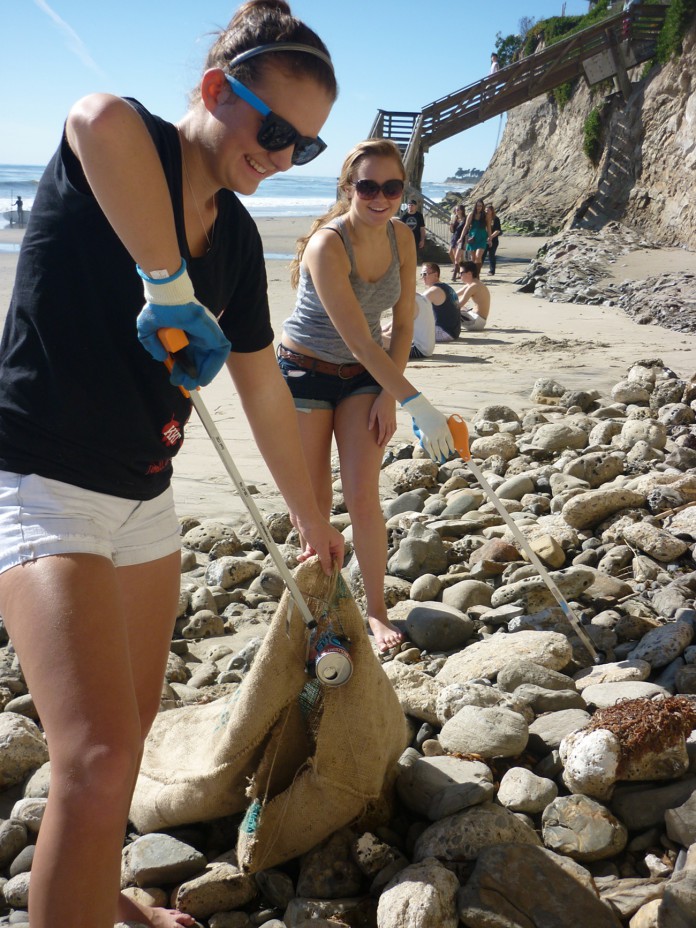 University of California Santa Barbara students and residents of Isla Vista gathered on Feb. 4 to clean up the mess left by Friday night partying. Carrying burlap bags and graspers, they cruised Del Playa and the IV ocean front, grabbing red cups, cigarette butts, broken electronic parts and all matter of strange objects. The event, dubbed the IV Community Beach/Street Cleanup, aimed to bring together the various clubs on campus and unite them to help keep IV clean.

The day began at 1 p.m. with the groups meeting at the intersection of Embarcadero and Del Playa to pick up supplies and sign in before breaking off to walk to Del Playa Park. Along the way, groups of three to six searched for items on their scavenger hunt list, which included items like filling a red cup halfway with cigarette butts (a surprisingly easy task) and collecting enough recyclable glass bottles to offset the amount of energy spent by the average person per month on Facebook (about 14).

The scavenger hunt shed light on how much trash is left behind around DP and the IV beach, and Erica Aguilera, a fourth-year environmental science major and outreach and education coordinator for Associated Students Coastal Fund, believes encouraging awareness is a key component of the cleanup.

“I think it’s important for us to take ownership of our own community and pride in our own community and try to keep it clean and do something not just for us,” said Aguilera. “It’s important that we keep it beautiful so we can enjoy the day and not have to sit in trash on the beach. But also, it’s better for the environment. And since we’re surrounded on three sides by ocean, we should be really aware that what we do in Isla Vista affects the ocean.”

Volunteers reached DP Beach with bags overflowing with trash, most of it broken red cups and glass bottles still filled with alcohol. Strawberries, salad and hotdogs awaited the volunteers as they dropped off their bags and returned their supplies. As they ate, some of the groups joked over the odd items they’d found (like pieces of clothing and electronic cords) amongst the expected trash items like burnt couch remains and the occasional busted heel.

“We found cigarette butts, red cups, beer cans, beer bottles, wine bottles, bottles that still had alcohol in them-what a waste, clothing, Styrofoam, electronic parts, the works,” said Presley Mellow, a first-year Campus Democrats member. “Today EAB, CAB and other organizations did the beach clean-up. We became aware of all the different kinds of trash that there is everywhere and we learned that a lot of people smoke on DP, [there are] so many cigarette butts on DP…I think when people see the mounds and mounds of trash that we collect that they’ll be aware that we’re destroying the environment.”

UCSB’s Surfrider chapter has been discussing putting on cleanups once a quarter with IV’s Adopt-a-Block program to promote keeping IV and the surrounding areas clean.