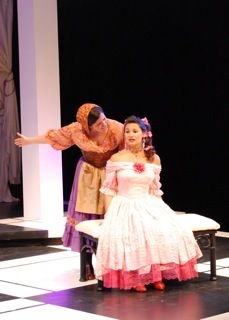 It’s not every day at University of California Santa Barbara that one encounters a good 17th century farce, featuring men in colorful tights, women in over-the-top Victorian-style dresses, and a villainous con-man, with the occasional raunchy exchange. This week and last week, UCSB’s Department of Theater and Dance put on an incredibly humorous and phenomenally performed production of Molière’s “Tartuffe,” directed by Tom Whitaker and translated into English verse by Richard Wilbur. The cast, which rehearsed from 6 p.m. to 10 p.m. Monday through Friday since the beginning of the quarter, gleamed in the technical mastery of the play.

Hypocrisy and deceit, especially linked with provocative seduction, never seem to go out of style in both literature and theater. Molière’s timeless play transports its audience to a comedic tale of piety and gullibility versus fraud and deception. “Tartuffe” is the tale of a hoaxer who tricks a wealthy patriarch into bestowing upon him first shelter and sustenance, and ultimately his entire estate. Bewitched by Tartuffe’s seemingly righteous piety, Orgon, a gullible French aristocrat, grants him everything from money to his daughter’s hand in marriage. While Orgon’s family sees Tartuffe for the filthy fraud that he undoubtedly is, Orgon is blinded by his deception.

“The play has a tremendous history,” said Eduardo Fernandez-Baumann, a fourth-year theater major who played the role of Orgon.

It’s a testament to the play that hundreds of years later, it is still being produced with great success. Fernandez-Baumann stated how daunting a task it was to approach a role that has been attempted and performed a multitude of times before him.

Fernandez-Baumann, as Orgon, delivered a superb performance that made his character so convincingly gullible that one would want to storm onto the stage and knock some sense into him. Profoundly detached from reality, Fernandez-Baumann elicited sympathy for his character, through a mastery of sternly confused facial expressions and bold body language.

Elena Adcock took on the role of Elmire, Tartuffe’s love interest and Orgon’s wife. In what is perhaps the most memorable scene, Elmire sets up a charade to capture Tartuffe in his attempts at seducing her to prove to her husband that Tartuffe is a fraud. Adcock mastered the character as she exhibited many varied vocal expressions, including seduction, shock and disgust.

Brian Bock played Tartuffe with the perfect amount of sleaze. He fashioned a character so loathsome and detestable, the audience loved to hate him. With the effect of dramatic irony, one could not wait to witness his anticipated demise.

Allie Granat, fourth-year theater major, embodied the character of Dorine, Mariane’s lady-maid, with manic energy and feisty exuberance. Granat was all attitude and spunk, bringing a shocking jolt of energy to the stage.

“She is such a dynamic character and so much fun to play,” Granat said.

The Department of Theater and Dance took on a classic, incredibly comedic production and made it their own. Full of slapstick humor and witty dialogue, Tartuffe is a show you won’t want to miss.