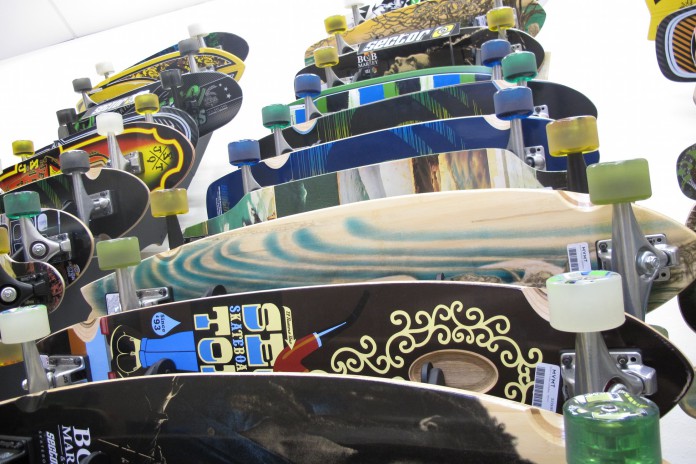 Students biking and skating to and from class is one of the most commonly known activities associated with the beach campus of University of California Santa Barbara. For a campus directly on the water, driving to class is more troublesome than pertinent, especially when factoring in the insane traffic rush of bicyclists and skaters hastily on their way down Pardall Road. Combining the two factors of the beach-town atmosphere and students aged from 18 to 22, Isla Vista begs for a surf-skate shop.

Movement Boardshop has proven essential to residents of Isla Vista by saving them time and providing them with a tangible experience, being located just minutes from their backyards and giving them the opportunity to visit the store with ease.

“Besides bikes, skateboards are the main form of transportation in Isla Vista,” said sales associate Jackson Huffman. “Whether it is to class or to the next party, almost everyone has a skateboard they use to get from point A to point B. IV needs a skate shop so that all the people living in IV or Goleta have a local, friendly place to go to for all their skating needs, as well as getting a person-to-person experience opposed to ordering product off the Internet or driving far away, which most students can’t do anyway. At Movement they can come in, look at boards, stand on them to get a feel for the ones they really like instead of just looking at pictures.”

Movement has recently relocated, moving to a ground building on the popular Pardall Road. Now students can walk in and browse the shop, something they were unable to do in its previous location above Silvergreens.

“The other one was cool, but it was very much a location-based retail place,” said owner Ben Mahon. “People were going for a specific reason. This one we get specific reason retail, but we also get people coming in doing walk-ins.”

Movement differs from the mainstream shops as it contains brands that may not be predominantly sold in the major surf-skate shop corporations.

“We are supporting a lot of small brands,” said co-owner Todd Giffiths. “You’re not going to come in and really see a lot of the big major companies that you can find at all the big mall stores. The nice thing about Movement is that it kinda has the skate-surf shop feeling.”

Aside from providing quality surf and skate equipment and apparel, Movement took philanthropic measures to help get a skate park running in Isla Vista. Perfect Park at Embarcadero and El Estero Park have been created for skaters to utilize in the community.

“[It] was something done through Parks and Rec and some of the guys over at the Skate One corporation in Goleta,” said Mahon. “I was there to support and I put my time and effort into it. I helped build it and I was there to help promote it.”

Due to lack of funding, the skate park has been unable to expand and consists of a few ramps that are now weather-beaten.

“That’s a project I would like to get more involved with, but there are a lot of problems with it,” said Mahon. “It’s at a bit of standstill. It’s been a project that’s been around for 17 years or so and it’s always had too many Indians and not enough chiefs, there’s never anybody who is able to kind of head it up and go for it hard and get it.”

Movement Boardshop continues to grow and thrive in the heart of IV attracting students and residents from all around the town.

“It’s important for this shop to exist [so it can] provide the right goods and services to customers in need as well as hang out, talk story, and make friends,” said Huffman.