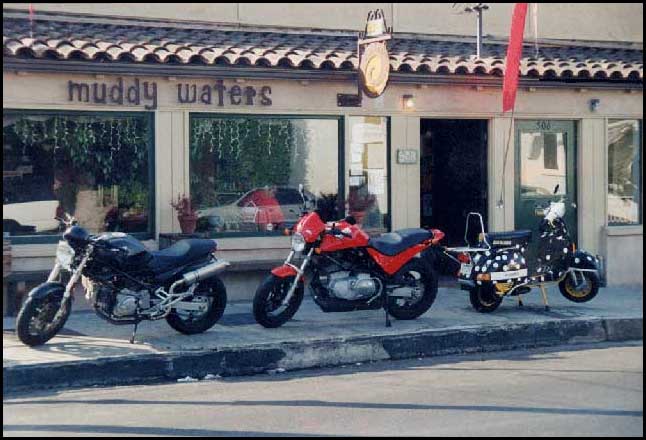 A new trio is making their name in the Santa Barbara coffee shop music scene, bringing a unique approach to performance and sound. The yet unnamed band, whose members consist of Anna Abbey on piano and vocals, Colter Frazier on bass and Jim Connolly on a variety of different instruments, never plays the same song twice. The material they perform is never written down; it’s “free, improvised pop music,” they say.

During a performance at Muddy Waters Café in downtown Santa Barbara last Thursday, the band attracted a dynamic and diverse crowd of people who were excited to see such a unique performance. The warm feel of the coffee shop, with its earth-tone color scheme and eccentric furniture, complimented the quirky style of the band.

As promised, the band featured many interesting types of instruments in their set. While Anna Abbey played piano and Colter Frazier played the bass, Jim Connolly played six different instruments that night: a child’s toy piano, a saw, an electric guitar, an empty aluminum garbage can, a banjo and a melodica- he even whistled. At every performance, Connolly said he brings a different set of instruments, however many will fit in his car. At the band’s rehearsal space, though, they have over a hundred different instruments.

It was certainly impressive to note that all of the band’s members had technical mastery of their instruments. However, the strength of their compositions varied from piece to piece. They were mostly in sync, but sometimes, because of the band’s improvisational style, the sound became muddled and distorted, making it difficult to catch any clear melody. But as the band got deeper into a song, the song became less muddled and smoother as the members of the band became more aware of what direction the song was going in. This could be confusing to some listeners, but conversely fascinating for music enthusiasts interested in the live creation of sound.

Anna Abbey’s vocals were, in my opinion, the highlight of the band’s performance. Abbey has a cool, soft, alto voice that ties in nicely with the folky, alternative style of the band. The lyrics she sung during the performance were also improvised, but that didn’t lessen their value as prose. Anna’s lyrics are vague, probably due to them not being written down in advance, but they’re full of expression, seen as she repeated the same catchy lines with style to much effect during the performance.

This fledgling band’s style is daring because of its different approach to music and performance. But despite its members’ choice to not follow the typical rules constraining most bands, their music is still enjoyable to listen to because of the uniqueness of their musical choices.