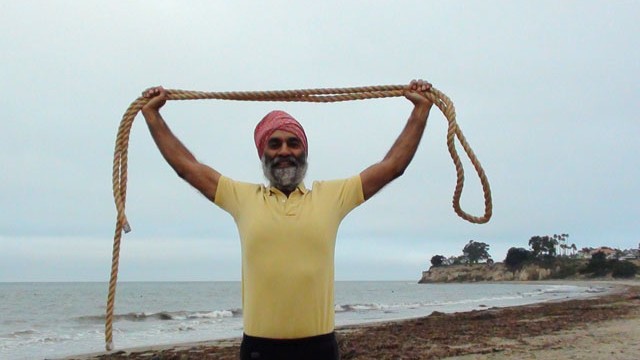 Everyone deserves a good life, at least according to Dr. Jasprit Singh, professor of electrical engineering and computer science at the University of Michigan. On Feb. 23, in Broida Hall at the University of California Santa Barbara, Singh offered complimentary guidance to students interested in “building a sustainable, good life.” He presented its seven layers and explained their relevance to how to live sustainably.

The seven layers of the good life are as follows: physical health, creativity, multidimensional life, love, expressing yourself, self-reflection and mindfulness. Singh taught the audience to pursue the journey that will have the least cost, and that one must start small in order to make a difference. Rather than plotting against big agriculture, people should think about what they can directly control, such as what to eat or spending money. He emphasized acting coherently; each action we take should enhance the previous action. Living in the moment is key; our minds must be in line with our bodies.

This idea is where yoga comes into play. According to Singh, yoga is essentially a way to learn how to take the journey with the least cost. Students of yoga must put themselves into stressful situations and learn how to deal with them. Releasing a pose is releasing stress. In essence, yoga is meant to reshape our brains to better deal with stress. He compared this process with airplane pilots- during training they are repeatedly put through disaster situations so when the time comes for them to act in a disaster they are calm and pay attention to the task at hand rather than the screaming passengers. Singh likes to think that pilots are actually doing yoga.

Singh founded the RussaYog style of yoga and has multiple studios that house his practice all over the United States. As a part of the lecture, he asked everyone in the hall to stand while he lead a stretch. People reached hands up above their heads until palms touched, all the while taking in a big breath. Then everyone slowly released their arms to their sides while busting out the hardest laugh they could causing the room to shake. With this exercise, Singh demonstrated that the good life does not have to be costly- it can be free.

The yogi also discussed modern technology and presented its deficiencies, which he encouraged to one-day fix. Singh pointed out the disappearing cost and scarcity of knowledge. What once only an expert could discuss can now be learned by a 10-year-old via his or her computer, smartphone or iPad. In this way, technology is helpful. However, Singh also pointed out another rather important issue: stress. There is very little technology devoted to de-stressing. In fact, he mentioned that the pet industry in the United States is worth $50 billion, which is even more than Intel Corporation. Pets release stress and the technology Intel offers does not; people gravitated to what cures their stress more so than to modern technology.

“Why is technology not working on giving us less stress?” asked Singh.
Certainly there is potential, but where are the results? He encouraged the audience to create the solutions. While Dr. Jasprit Singh admitted to not having fully achieved the “good life,” he is well on his way. He practices what he preaches and encourages people to do the same- to choose a path that is socially responsible and sustainable. Ultimately, Singh advises to take the time to know thyself and in the end do what makes you happy.