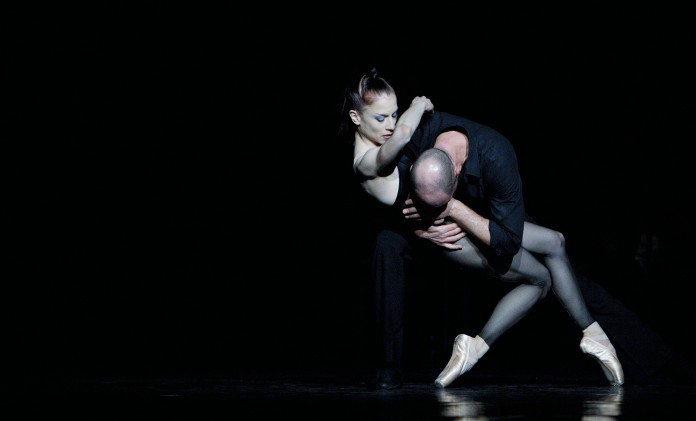 Manipulation, mechanized motion, multimedia and musicians…oh my! The lovely La La La Human Steps dance company delivered a creative and memorable performance at the Granada Theatre on Saturday, Jan. 28. On top of giving an outstanding show, La La La Step’s dancers also made a trip to University of California Santa Barbara, visiting several UCSB dance lecture classes and teaching a piece of the choreography to a master class for dance majors.

La La La Human Steps is a Canadian contemporary dance company based in Montréal. As its quirky name suggests, the company presents works that are unconventional and tantalizingly thrilling in nature.

Ninotchka Bennahum, a professor in the department of theater and dance at UCSB, aptly described the company’s style as “sexy, urban chic.” The dancers’ movement was definitely exuberantly physical and sensual. In fact, one of the company’s first pieces was titled, quite memorably, “Human Sex.”

Many unique and varied elements put this company in a genre of their own. Throughout the performance, a live band played onstage, and multimedia film sequences played in the background, synchronized to the dancer’s movements. Most notable, however, was the lightning speed and clarity with which the dancers executed their movements. At times, it seemed as though one was watching a dance film on fast-forward.

The company currently employs dancers from all over the world, including China, Canada, Austria, America, Colombia and Brazil. These dancers all have strong ballet backgrounds, which give them the technical skill required to perform the lighting-fast choreography. The female dancers wore pointe shoes and sleeveless black leotards, while the men donned black suits. It was interesting to see both very tall and somewhat shorter women onstage together.

The “New Work” piece featured dramatic lighting design, alternating between illuminating a sequence of movement with a bright beam, then plunging the dancers abruptly into darkness. Edouard Lock, La La La Human Dance Steps’s artistic director and choreographer, said he was interested in exploring the ambiguity of the obscured and the unknown.

The dance was created completely separate from the musical score. This is a rather unconventional approach to choreography, for dance is usually seen as being intrinsically linked to music from its inception. However, Lock said he believes that the audience inevitably makes its own connections between the two, and rejects the notion that movement must be dominated by music.

Lock’s choreography challenges the viewer to be an active participant, ask questions, make connections, and create their own interpretation for what is happening onstage. Since there is no clear storyline, each audience member may create a completely unique perceptual vision of the dance, thereby establishing a personal connection to the piece.

“We end up understanding better when we are given partial information,” said Lock. “It is okay not to have a specific clear meaning all the time.”

He seemed to suggest that this philosophy applies to both life and the stage. It is evident in his dramatic lighting design, as well as the show’s abstracted plotline.

“I thought that the performance today was really innovative and creative,” said Aditi Trivedi, a second-year biology major. “Lighting was a big part of it, [the artistic director] played with black and white, he used all these elements to bring out different meanings about the mystery in life.”

“The dancers were very accomplished and it was visually appealing,” said Trivedi, lauding the overall impressive performance.