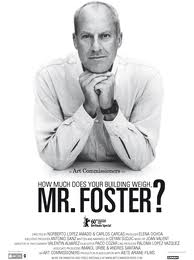 If you’re of the conventional mindset when it comes to architecture, prepare to be yanked out of the box by the movie “How Much Does Your Building Weigh, Mr. Foster?” This in-depth portrait of architect Norman Foster and his designs explores his thought process and forward ideas. The film was screened on campus by the University of California Santa Barbara Arts & Lectures Program as a part of the Arts and Architecture Film Series on Feb. 12 at Pollock Theater.

Not only does this film narrate the aspects of Foster’s architecture with words, but it also lets the viewer peek into his mind to better understand his process and ideas with images of his drawings and firsthand accounts from colleagues and friends (one of which is Bono). It introduces us to Foster as a young lad from “the wrong side of the tracks” during the Depression in Manchester, England, whose parents worked very hard to make ends meet. This is where he gets his intense work ethic, as his friends and colleagues observe throughout the film.

“He wants to conquer weakness in the sense that he wants to show how far one can go through will power,” publisher and writer George Weidenfeld said in the film.

Foster opted to change the world for the better through architecture, a sentiment I can relate to and appreciate very well, as an aspiring architect and designer.

The movie’s dramatic close-up visual examinations of Foster’s structures reflect his ideas about architecture. He realized that architecture profoundly affected his mood, so he said he felt architecture dictates how a person feels, by stirring emotion and awe within the viewer. The film’s accompanying music played during close-ups accelerates the emotion conveyed by Foster’s impressive buildings, as well. Such cinematography echoes Foster’s theory of architecture’s roles in human sensation.

Foster is a true modernist in that he strives to build the best and strongest structure through the most efficient use of materials. A good example is an interview with Foster about New York’s Hearst Building, in which he attributes its efficient construction to the triangular skeleton, which uses twenty percent less steel. His idea was also derived from the fact that the strongest things in observed nature are made of triangles. Additionally, most of the steel used is recycled, furthering the building’s advance toward being as sustainable as possible, a particularly important consideration in architecture today.

With Foster’s remodeling of the Reichstag Building he takes modernism even further, by attempting to work with nature rather than imposing an edifice onto it. After the building was destroyed during World War II, Foster was asked to preserve the integrity of the building’s iconic dome in his redesign. He looked to modernize the dome in many ways. ??

“[I want it to] work with the winds, [so it] would scoop air, would actually draw sun in, would have a shade, and would also celebrate a kind of processional rule to the summit for the many visitors who would come to the cupola,” Foster said.

If that statement does not exemplify modernism, I do not know what else does.

The film concludes with some questions of speculation: is Foster’s architecture redundant? How much more innovative can architecture get? Is a world “covered with Fosterism” such a good idea? You, the viewer, will be able to decide for yourself in this delightful film.