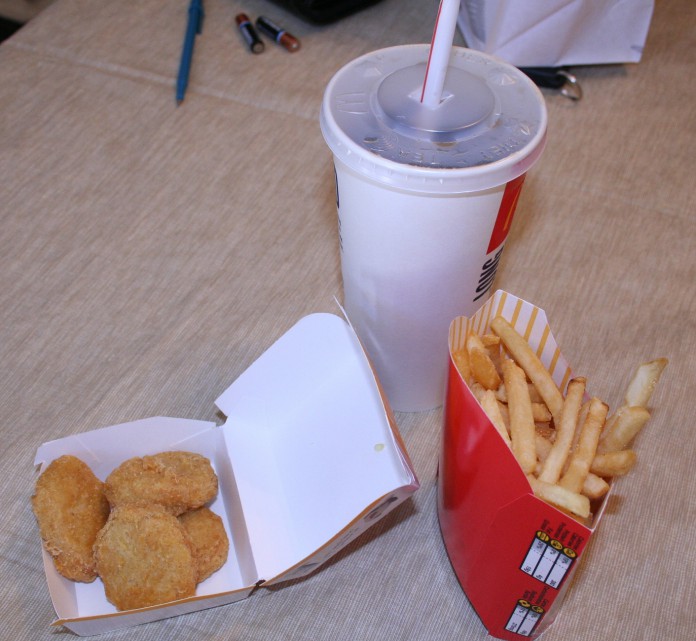 In a college atmosphere, there’s not always time to cook every meal. Whether the day gets filled with too many tasks, or the stress of schoolwork becomes too much, it’s convenient to have food already prepared, fast to get and cheap.

But what happens when that food cannot be trusted or taken at face value?

Stacey Irvine, a 17-year-old British factory worker, was recently rushed to the hospital after collapsing and struggling to breathe. Upon examination by doctors, Irvine’s health scare was attributed to a diet consisting almost exclusively of fast food chicken nuggets.

At first glance, the healthiness of chicken nuggets may be oversimplified. A white meat traditionally leaner than other meats; chicken is a popular option in healthy eating. However, the preparation of the nuggets is what makes them unhealthy. Lisa Collier Cool, in an article for Healthline, notes that chicken nuggets are already unhealthy as “merely chunks of chicken breaded and deep-fried in oil.” With the deep-fried method described by Cool, the nuggets already start off as a not-so-healthy option for chicken eaters.

But what happens when the fast food industry gives its own spin on this meal option? Initially, McDonald’s chicken nuggets seem relatively harmless. A four piece serving of the famous McNuggets consists of 190 calories, 12 grams of fat and 12 grams of carbohydrates. However, these chicken nuggets have a high 360 mg of sodium, and Cool reports that the McNuggets are “low in nutrients everyone needs, such as calcium, fiber, vitamins, antioxidants and healthy fats.” Moreover, Cool adds that the chicken contains additives such as THBQ and dimethylpolysiloxane, a form of silicone commonly used in cosmetics. Suddenly, chicken nuggets do not seem as healthy an option anymore.

“I wouldn’t be that alarmed, because when you eat too many carrots your skin turns orange, so she probably just ate only chicken nuggets,” Tayler Reinhart, a second-year English major at Antelope Valley Community College, said. He did admit, however, that Irvine’s condition was concerning.

“I rarely eat fast food, especially after watching “Super Size Me- [my teachers] made us watch it in P.E. But I still like to order chicken nuggets…although I may not as much now,” Alysa Agustin, a second-year psychology major, said.

Irvine’s hospitalization came only days before reports surfaced that McDonald’s has stopped using “pink slime” in their meat. The “pink slime,” according to an article in the New York Times by Mark Bittman, consists of “tiny bits of beef in leftover fatty trimming, which are then doused with ammonia in order to kill E. coli.” This raises important questions: can fast food meat be trusted? Should it be consumed? Are there any healthy options at fast food restaurants?

For those turned off to chicken nuggets in general, there are several options to restore the healthiness in this American meal. Preparing the nuggets at home by rolling fresh pieces of store-bought chicken in egg, covering in cornflake crumbs, and baking is one alternative method. Ordering grilled chicken strips is another great substitution, as they maintain the healthiness of chicken and reduce the unhealthiness that comes from the crust and frying of the nuggets. Either way, both options present healthier spins on a meal that is not so diet-friendly. Stacey Irvine, take note.