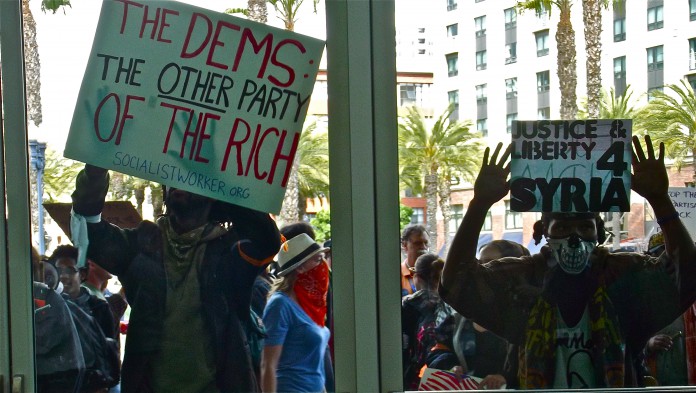 Democrats from across California congregated in San Diego the weekend of Feb. 10 for the California Democratic Party 2012 Convention. There, Democrats discussed policies and prepared for the upcoming elections and presidential race. Former speaker of the House Nancy Pelosi, Lieutenant Governor Gavin Newsom, Governor Jerry Brown and others spoke in support of Democratic principles including gay marriage, social security, women’s rights and the returning of troops from Afghanistan. Attendees consisted of statewide caucuses and members of the California Young Democrats including University of California Santa Barbara’s own Campus Democrats.

Events are held throughout the weekend to introduce democrats to one another and create connections across the state.

“We will spend much time discussing how we fight and where we fight, but even more importantly we come together to remind ourselves why we fight,” said Speaker of the Assembly John Perez. “We fight for working families who suffered mightily during this great recession. We fight for the students who question whether the dream of opportunity is still alive for them here in California…We fight for all those for whom justice is wanting.”

The effects of the Republican Party on Congress and their interactions with the Democratic Party stood out as key talking points amongst many of the speakers. Barbara Lee, a California congresswoman, openly opposed many of the main policies supported by Republicans and expressed her own views on the party.

“They want to dismantle government, protect and promote the super rich and corporate donors and leave everyone else out in the cold,” said Lee. “What is happening in our country is unacceptable and we’ve had enough.”

Gov. Brown continued this mindset when he spoke out against the No Child Left Behind policies, which led to an increased reliance on testing for acceptance into colleges and for state funding to public schools.

“The people who know about teaching are the people who teach, not the people who never go into a classroom,” said Brown. “Tests have become an obsession. A certain amount of test [is] good. Accountability [is] really good. But too much of a good thing becomes a bad.”

While Brown focused on current issues, Lieutenant Governor Gavin Newsom turned his attention to the future of the Democratic Party and the need for strength amongst its members in the upcoming elections.

“When we muster the courage to stand up and to speak out, to take ideas and turn them into action,” said Newsom. “When we do that, it always seems that the left ends up on the right side of history.”

“Many people think the death penalty is cheaper than life in prison without parole,” read the flyer, “but that’s just not true.”

Anonymous was also present at the convention Saturday to protest the political process, the recent passage of the National Defense Authorization Act, which contains a clause suggesting a government ability to indefinitely detain an American citizen without trial, and the increasing role of money in politics. Standing outside the entrance chanting and holding signs reading “Dems: The other party of the rich” and “Democrats = Republicans = Worker Repression,” they peacefully assembled for several hours while speeches were given inside.

“There are multiple reasons [we’re protesting],” said a masked Anonymous protestor. “First of all, NDAA and the passage of that. We believe that it is a complete negation of our civil rights. It falls in line with the Koremastu decision, the ability for people to be detained within internment camps. The main problem is that it completely negates the Fifth, Sixth, Seventh and First Amendments, pretty much a good majority of the Bill of Rights.”

The convention concluded on Sunday shortly after delegates voted on which Democratic candidates to endorse and the final presenters spoke. Attendees left the convention with new contacts and a deeper understanding of the Democratic process.

“Hearing all our elected officials speak really inspired me to be more passionate about politics going into this election year,” said UCSB Campus Democrat member Presly Mellor. “The whole convention affected the mindset of the California Democratic constituencies, encouraging them to be victorious in the 2012 election.”