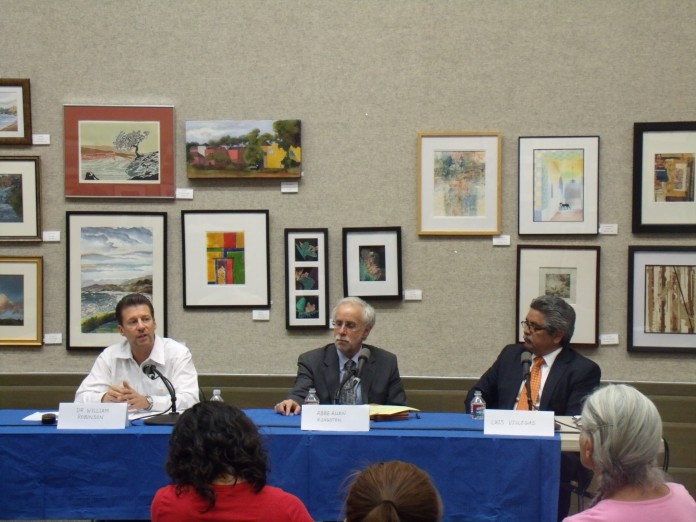 “The original purpose of the forum according to [SBWPC] is to look at immigration and look at what’s being said in terms of the dominant public discourse with the regard to immigration–that immigrants take away from the U.S. economy,” said Robinson, a Sociology, Latin American Studies and Global Studies professor at University of California Santa Barbara. “That immigrants are criminals, etcetera and to respond to some of that with actual facts and actual analyses, but specifically to focus on the role of women in that scenario.”

The forum presented facts as an attempt to clear the wide misconceptions about how immigrants negatively impact the economy and later transitioned into current political actions aimed to attack undocumented immigrants.

Policies such as Arizona SB 1070 and Alabama HB56 were described as attacks criminalizing undocumented immigrants for profit through corporations like Corrections Corporations of America, CSI and GEO Group, who finance and participate in drafting these legislations.

“These states themselves are also tied to this private immigrant prison industrial complex–including, to give you an example, Arizona Governor Jan Brewer and Arizona State Senator Russell Pearce who actually introduced and wrote up SB 1070. They’re investors in these companies,” said Robinson. “So these people don’t want to run anti-immigration. They just want to criminalize immigrants for profits.”

Same with exploiting immigrants, the forum focused on undocumented women and their exploitation in the workforce like sweatshops through policies like NAFTA, the North American Free Trade Agreement.

The panelists spoke about the roles, identities, and the available resources for undocumented women. Because of barriers such as language and fear of status, undocumented women struggle with a variety of issues like domestic disturbances.

“Clearly in that situation, intervention is needed, counseling is needed, protection is needed,” said Kingston, an immigration law specialist and part of KMH Immigration Attorneys. “But often the fear of removal and deportation from the United States result in the separation of families, that is not the desired result, which means we see many people who are afraid to come forward, afraid for their other family members who might be undocumented.”

Specifically pertaining to the Santa Barbara community, statistics show that there are a growing number of women immigrants who own businesses.

“In the county of Santa Barbara there are approximately 38,000 businesses–of those about 4,000 are Latino owned–approximately 10 percent,” said Villegas, the president of the Santa Barbara Hispanic Chamber of Commerce. “[In Santa Barbara] County, probably in terms of woman-owned businesses, about 28 percent…The fastest growing entrepreneurial segment in the United States, in our state and in our county are women.”

The forum emphasized an overall goal for broader organization and educational purposes.

“We tried to hit on some of the aspects of feminism in terms of how women are either positively or negatively effected through their immigration to the country,” said Jane Gray, the board president of SBWPC. “Also we tried to give the perspective of once they’re here how they contribute to the larger society.”