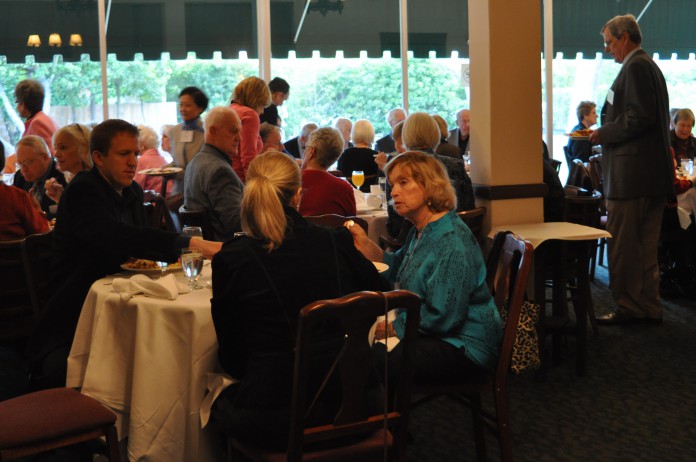 University of California Santa Barbara Political Science Professor John Woolley gave a presentation Friday to a small crowd gathered at the Santa Barbara Club during the Chancellor’s Community Breakfast, and offered insights to the possible outcomes of the 2012 Presidential election. The fundraiser breakfast, held in downtown Santa Barbara on Chapala Street, was also organized to present findings from Woolley’s American Presidency Project. The Presidency Project, founded by Woolley in conjunction with fellow UCSB faculty Gerhard Peters in 1999, is an online archive of nearly 100,000 documents related to the history of American presidents.

After an introduction by UCSB Chancellor Henry T. Yang, Woolley’s presentation began with two pieces of fan mail. The first was from Kyle O’Connor, a speechwriter for President Obama, who thanked Woolley for creating the Project, which he claimed to use frequently.

“I asked him if he could send the same letter back to me on that cream white letterhead from the White House,” Woolley said, jokingly. “I never got a response.”

The other letter was from Brian Chickering, a Tea Party organizer from Tennessee, which similarly praised Woolley’s efforts.

“I hope that it demonstrates how non-partisan we tried to be with this project, that both sides use it,” Woolley said.

A political scientist by training and practice, Mr. Woolley projected how President Obama could win re-election with a flurry of PowerPoint slides. Combining statistics from Gallup job approval polls, Gross Domestic Product, incumbents, non-incumbents, job growth and other economic indicators, Woolley calculated that Obama would need at least 52.8 percent of the popular vote to win in November. The economy, Woolley demonstrated, may be what makes or breaks the Obama presidency. One slide in particular showed a nearly intertwined growth in job approval of the President and the pace of growth in the American economy.

“Obama is right at a place where if the economy goes a little bit down, or if Europe tanks, he’s toast,” Wooley said.

Mr. Woolley also addressed the phenomenon of Super PACs, political organizations capable of raising an unlimited amount of funds in campaign donations, unique to the 2012 election.

“Super PACs insert themselves into this election in very irresponsible ways,” Woolley said. “Both parties are going to capitalize on this because it’s a very enthusiastic campaign.”

Particularly in the case of the Republican primaries, Woolley believes that every state in which voters are closely divided in supporting the President will become crucial to deciding the future of the nation. While California is projected by many experts to fall in Obama’s favor in the Electoral College, states with a number of self-identifying “independent” voters such as New Hampshire and Florida are likely to see millions of dollars worth of attack ads. Mitt Romney’s election campaign has spent close to $17 million on the Republican primary alone, while Obama’s campaign has gathered close to $100 million to date.

When asked about his thoughts on political participation on the UCSB campus, Mr. Woolley said that he saw students as “generally politically detached.”

Despite UCSB’s consistent placement among the top of American universities with registered voters, Woolley said he was surprised by the lack of political fire in the student body.

“Even during the Occupy movement, I didn’t see a lot going on among the students; there was minimal political visibility,” he said.

This may be due in part to relative lack of political issues that UCSB students contend with in their personal experiences.

“Most people get involved in politics because of a particular cause; if you know someone with AIDS, you get involved with AIDS awareness,” Woolley said. “I was biking down Del Playa the other day, and saw students outside on a weekday… and began to think maybe UCSB students just don’t have enough to worry about to get mobilized.”