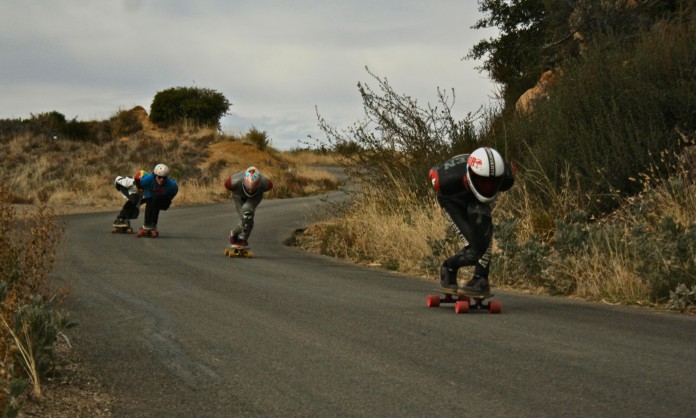 Downhill longboarders flocked from all over the West Coast to race down a winding mountain road at Santa Gnarbara Outlaw, an event put on by University of California Santa Barbara’s Longboard Club on Jan. 14. The race, run by the club’s president, third-year Chris Cawdry, hosted 72 contestants split into two divisions and was held at, as the organizers of the event stated, “a secret location off of Mission Canyon Road.”
After signing up to compete, riders were categorized by age. The open division consisted of those eighteen and over while younger competitors were placed in the “Groms” division. Within each section, contestants were organized randomly into heats of four, with the top two from each heat moving on to the next race. The first place titles went to Tim Del Rosario for the open division and Sean Chantarachara for the “Groms” division.
“There are certain techniques that you just have to learn,” Del Rosario of Claremont, Calif. said.
He said that one of his methods for winning was letting his competition push ahead of him from the start line, which allowed him room for a few big hauls in their backwind that propelled him forward to the front.
Skill levels ranged from those who had been competing for years to those who had picked up downhill racing only months before. Fortunately, no medical attention was required throughout the day, despite the incredibly high speeds and sharp turns the riders faced.
“The guys that [longboard] are intelligent and can manage risk. And there’s a Zen aspect to it,” Brad Miller, president of the longboard bushing manufacturing company RipTide Sports Inc., said.
To decrease their chances of getting hurt, the riders had to stay aware of their speed, balance and the road beneath them, as well as use different techniques like tucking over or sticking an arm out to alter their speed and position.
While the nature of downhill racing is intense, the mood of the race itself contrasted sharply. Although the riders competed against each other, they cheered one another on as well.
“When you share the same passion, you’re chill with each other,” said 19-year-old longboard rider from Santa Barbara Community College, Dave Billesbach.
Ultimately, the race was not so much a venue for competition as it was a place for longboarders to come out and support one another in their devotion to the adrenaline, skill and satisfaction of downhill longboarding.