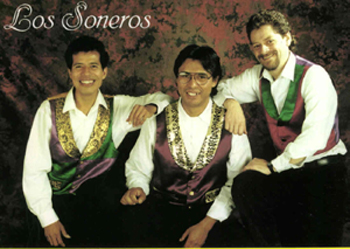 A jarocho music ensemble from the banks of the Tesechoacan River will bring the Santa Barbara community together for free family concerts next weekend. Los Soneros del Tesechoacan’s members hail from Veracruz, Mexico traveling the continent sharing their rich and unique culture by spreading the joy of music and dance.

A key aspect of the group’s motivation behind their music is the interconnected collaboration between the generations that make up the band, as well as their audience. Their wish is to create access to Mexican culture, educating their audiences through each performance. As the eldest band members age, they continue to pass on knowledge of their distinct sounds, instruments and dances, as well as the sense of community imbued in their music. Their concerts never fail to attract families of all types and ages, keeping the traditions of the son jarocho music alive. In addition to the concerts, Los Soneros hold free workshops for those who wish to learn even more about the musical ways of the people of Veracruz.

Son jarocho describes a particular kind of sound in Latino music culture, consisting of rhythmic beats, string plucking and heel tapping that are combined with rich, spirited vocals to resonate together as one interwoven piece. The band plays little eight-string guitars called jaranas, while adding percussion with their own bodies and stamping their feet on the wooden platform they perform on. They add further dimension to the rhythm with a particularly special instrument called the quidaja, which is the jawbone of a donkey. Included with the body-moving music is decima, a lyrical improvisation of spoken word in the band’s native Spanish language. All of these components come together to create the unique sound of son jarocho that connects every generation.

Los Soneros aim to continue the culture of their ancestry, despite the many trials they have faced with environmental disasters, poverty and global modernization. At the core of the lyrics are stories of their home and history, along with the deep emotions that coincide with the struggle to preserve a culture within a constantly changing world. In the communities that Los Soneros reaches out to, similar battles can be fought against with the power of awareness and fellowship that breaches the physical boundaries of a city or country. Around the globe, each community has its own set of obstacles. Los Soneros intends to impart the methods of overcoming those obstacles in their expressive message.

Thanks to ¡Vive el Arte de Santa Barbara!, Los Soneros del Tesechoacan will be sharing their musical stories with the Santa Barbara community, beginning with a performance at Isla Vista Elementary School Friday, Jan. 20 at 7 p.m. On Jan. 21 at 7:30 p.m., the ensemble will perform at the Guadalupe City Hall. On Jan. 22, Los Soneros will be performing as well as hosting a workshop. The free workshop in downtown Santa Barbara’s Casa de La Guerra, which is from 3-5 PM, will be held by Los Soneros to educate participants about the musical culture of Veracruz. Later that night, the band will conclude their weekend here in Santa Barbara with a performance at Santa Barbara Jr. High’s Marjorie Luke Theater at 7 p.m. Everyone is welcome to experience the colorful, energetic sounds of Los Soneros, and to join in the dancing and singing with family, friends and neighbors.