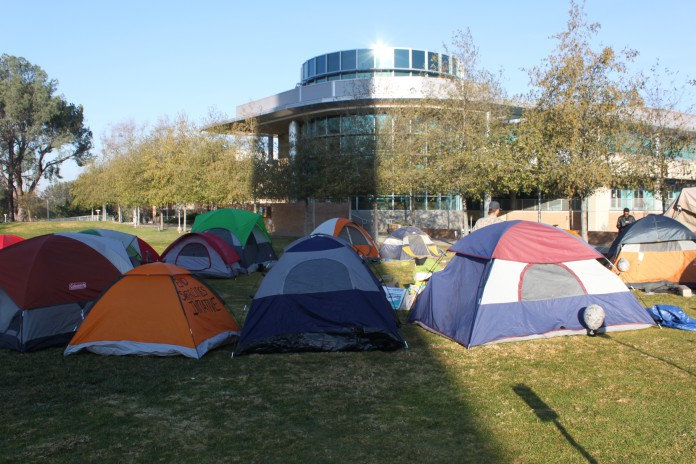 Protesters emerged outside the University of California Regents Meeting on the University of California Riverside campus Wednesday to express their frustration with the latest round of budget cuts to the school system. The UC Regents announced plans to slash $750 million from the UC budget in 2012, in addition to a series of tuition increases and other budget reductions brought upon the schools since 2009.

Some instructors led “teach-outs” by holding their courses outside of classrooms, while a number of student-led organizations, including Occupy Riverside and Associated Students of UCR, held rallies on the Riverside campus to protest fiscal decisions by the Regents.

Cindy Liles, a third-year environmental studies major at UCR, said she joined Riverside’s Occupy encampment because of their involvement with other organizations, but that she agrees with their anger towards the Regents.

“I’m coming close to graduation, and my last English requirement can’t be fulfilled because the class I needed got cut last year,” she says.

Fellow Occupier Jasmine Kavezade, a third-year biology and psychology double major, said that she perceived the December 2011 Regents’ pay increases for 12 administrators and attorneys of up to 23 percent as greedy considering the impact budget cuts have had.

“We care about the UC’s liaisons to Sacramento but it pisses me off that while they’re making decisions that affect me, they are getting paid more and more,” she said. “They cut our [UCR’s] journalism and communications programs, and that’s why Occupy is demanding they rescind their pay increases.”

Another group leading protests Wednesday was ASUCR, who, along with students outside the student government, brought forth an alternate proposal for increasing the UC budget. The plan, entitled “Fix UC” has garnered attention from across the state, even from UC President Mark Yudof. During his opening remarks inside the Regents meeting President Yudof said that, “I find myself in accord with the philosophical undergirding of this constructive proposal,” and said he holds “great respect” for the authors of the plan.

UCR students Alex Abelson and Chris LoCascio, who helped develop the budget proposal, gave speeches at the ASUCR rally describing their vision for UC’s future in gathering funds. Abelson, a fourth-year studying economics, explained “in the first six years of this proposal’s implementation, we could eliminate all of the current deficits.”

The central idea behind the plan is to take 5 percent from the earnings of all UC graduates who find a job after graduating, while paying little to nothing during their tenure at the universities. The 5 percent would apply to all employed graduates, regardless of their wage and ideally would compel the University to assist students in finding work in order to get their money back.

“We worked for nine long months to get this proposal done,” LoCascio, who is also the editor-in-chief of UCR’s Highlander newspaper, said. “We hope that the Regents will take these students’ voices seriously.”

Chris Riley, a fourth-year political science major at UCR, was also involved with the creating of “Fix UC” and introduced his own fundraising idea: a political action committee for the sake of UC students. He believes that the Regents have been forced to make hard decisions with the realities of Sacramento’s budget, and that now students should take funding into their own hands.

“I want this PAC to help get rid of the ‘blame the Regents’ mentality,” Riley said.

By establishing a student voting bloc and financial support for candidates willing to represent students’ interests in Sacramento, Riley believes that students can steer their own agenda.

“It’s not fair for us to be charging students for their education when they can literally least afford it.”