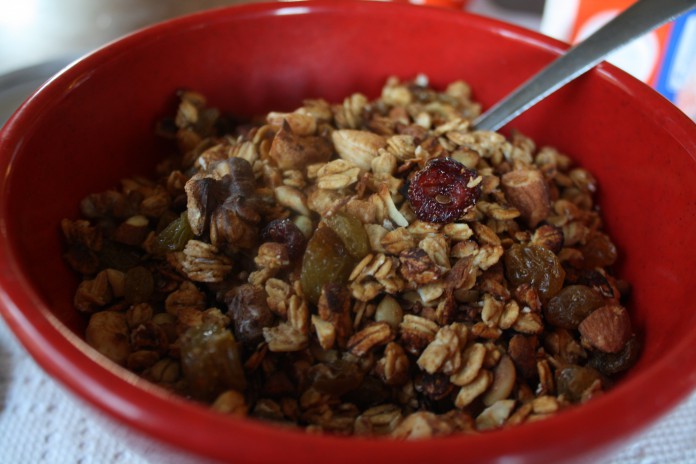 Because Isla Vista teems with eateries, students have access to any type of food they desire. Although many available choices are cheap, filling and tasty, this fast food may do more harm than good when it comes to students’ well-being and future health.

Eating large amounts of food, like cheese and meat, that are high in saturated fats may not exhibit their effects on young adults, but still build up unhealthy levels of cholesterol over time. High cholesterol levels lead to clogged arteries and an increased risk of heart disease.

Dr. Art Gilbert, professor of nutrition and exercise physiology at University of California Santa Barbara, strongly believes that young people should be aware of what they eat now and of the future consequences rooted in unhealthy eating habits.

“Thirty or 40 years from now, people will start having heart attacks and strokes,” Gilbert said.

However, he doesn’t suggest students change their diet completely. Instead, he recommends simply making healthier choices, like adding vegetables and low-fat cheese to pizza or going with whole-grain bread instead of white.

When it comes to eating out in Isla Vista this seems easy enough, but the daunting task of at-home cooking often scares students into buying easy, pre-made products that usually contain unhealthy amounts of sodium, sugar and trans fats. However, the Isla Vista Food Co-op General Manager Melissa Cohen believes students should not shy away from making their own food and advocates preparing meals from scratch.

“Any time you make your own food, you know what’s going into it,” Cohen said.

At the Isla Vista Food Co-op, healthy foods at good prices are easy to find and can be used for quick, simple and mouth-watering meals. Their “Basic Needs” program offers a list of over a hundred items that students consistently need at prices comparable to any chain grocery store. These deals draw in many students who strive to eat healthy on a budget.

Talin Nal, a second year student at UCSB, says that he chooses the Isla Vista Food Co-op for its variety of organic local food choices.

“If it’s healthy, I don’t care about the price, but I do try to look for sales,” Nal said, pointing to a yogurt product reduced to half its original cost. Sales on regularly used products are common throughout the store, particularly in the bulk section.

Buying groceries in bulk is typically cheaper in the long run, and makes it easier to make delicious meals in large portions that may be saved for later. Homemade granola, for example, can easily be made from oats, dried fruit and nuts sold in bulk. At the Co-op, even the peanut butter can be ground on the spot and local honey can be poured into a reusable jar. Depending on sales, special items like flax or pumpkin seeds could also be added at a low cost.

For inexpensive, easy and healthy homemade granola, try out the recipe below:

1. Preheat oven to 350 degrees.
2. Melt together the peanut butter and honey in a large skillet on low heat, mixing in the cinnamon.
3. Add the applesauce and blend into the mixture until it reaches a smooth consistency.
4. Stir in the oats until they’re completely coated with the sticky mixture.
5. Mix in the chopped nuts and seeds.
6. Spread out the entire mixture on a baking sheet, put in the oven for 10 minutes.
7. After, take out the sheet and stir the mixture with a spatula to ensure that the granola is cooked evenly.
8. Put back into the oven for an additional 10 minutes, or until granola is golden brown.
9. Take out the granola and allow to cool before tossing in the dried fruit.

The fresh granola can be enjoyed with milk, almond milk or yogurt, or even on its own. It will keep for weeks in an airtight container. Eat it with breakfast, throw some into a baggie for midday snacks, or use it to top desserts.