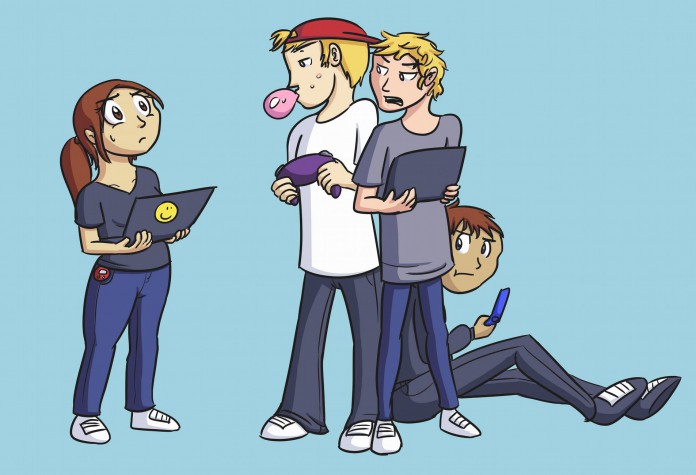 I love video games. Pokémon and Sonic were facets of my childhood. While most girls were playing with dolls and such, I was content with my Game Boys and Genesis. Now I regularly play “League of Legends” with my friends in the dorms. I, until somewhat recently, played “Team Fortress 2” with this nice little group I met online. Nobody really excluded me even though I’m just about as useful as a wet blanket. Unfortunately, these people are often times the exception, not the rule, as to how women tend to be treated.

Like I said, I love video games, but I don’t particularly love the way women are generally treated by the gaming community as a whole. I don’t like how may of us get insults hurled at us for simply being in a game or how some of us get unwanted advances when we just want to pretend to shoot things on the screen. Yet some of these guys complain about being girlfriend-less nerds. I consider myself rather lucky for only experiencing either of these maybe a couple times when I strayed from my usual games with my friends.

Even if we are not directly insulted, there’s still this sense that women are not “fit” to be gamers. Since there are proportionally fewer of us in the community, we therefore enter a male dominated setting. And, like many other times in history, there’s this general belief that women aren’t as good at “man games.” This harmful attitude only helps perpetuate the belief that most girl gamers are either someone’s girlfriend who got roped into his hobby or just people who aren’t good at the game. It’s like these guys are the group of boys down the street who play baseball all the time and the only way you can play with them is if you’re as good as, or maybe a little bit better than, most of them.

But these guys will get mad if you subvert their expectations by beating them. Some of these gamers are just sore losers in general, but being beaten by a “girl” somehow bruises their masculinity.

And then there’s the sexual harassment and sexist insults, one of the key differences between how men and women are treated in game. Men also get flamed for not being on par with teammates who aren’t all that patient and for being better than some sore loser. They too get picked on for various reasons. But men almost never have to contend with someone making sexual remarks about them. Otherwise, the abuser is “gay,” and that wouldn’t be good. Women are often told to “go back into the kitchen” or other not-so-pleasant things. These men see our objections they disagree with as our “over sensitivity.”

There’s also the related problem with how women are portrayed in games. Male characters are usually posed carefully to express the attitude and/or personality of that character. Female characters tend to be posed less to show off their personality and more like they’re showing themselves off. Male characters also seem to have a much larger variation of body types between them while women are usually “idealized.” One example of this is how male characters tend to have conventional armor in fantasy games while female ones tend to have bikini chain mail or something similarity impractical. Worse, if a woman brings up that she doesn’t like how women characters tend to wear less clothing and are more homogeneous in bodily shape, she’ll likely get shut down with something akin to, “But the game wasn’t made for women anyways.”

I think there are many good things about games too. People can learn to cooperate with each other and make friends on top of just having a fun time. But misogyny is a huge problem, and it won’t get much better until the gaming community as a whole begins to recognize it, discuss it and start fighting against it.