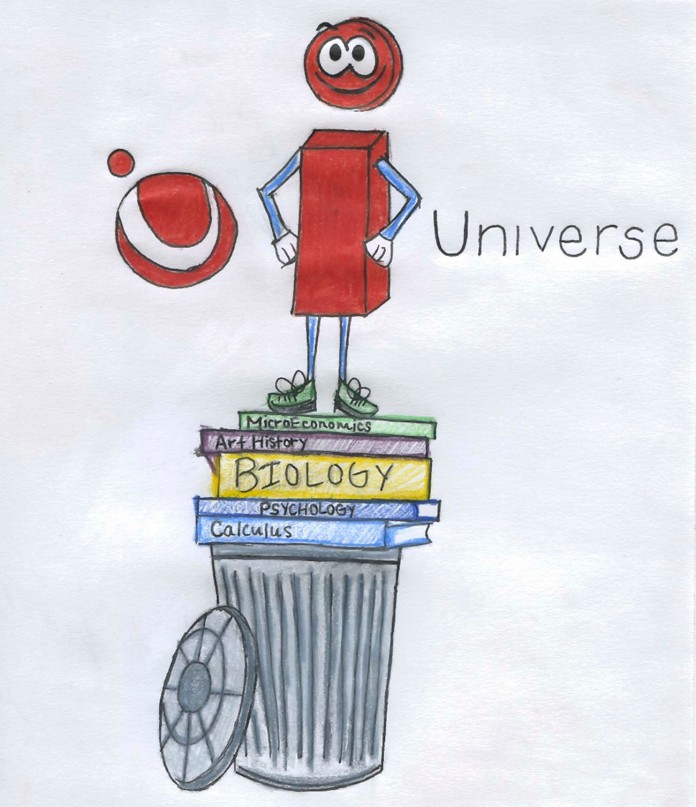 Finally done! That’s what I thought when I hauled the last box of textbooks from the back seat of the car and into my new apartment at the start of fall quarter. But then I hear my dad yell, “There’s one more box in the trunk!” My bookshelf was already full and my cramped three-person bedroom had no more room for the books it currently housed, let alone the load necessary for the upcoming quarter or the rest of the year.

And then I found my solution: the iBooks app.

The most obvious benefit of iBooks is that it saves space and weight. Literally thousands of books are instantly available to you on devices that can fit in your backpack, or even your pocket. All those textbooks you didn’t sell back because “you might use them one day” do you no good if you left them at mom and dad’s to save space in your room.

Another benefit is that all of your books are with you wherever you go on campus. Don’t you hate that awkward hour you have between classes sometimes? It’s not enough time to go home and get comfy, but it is way too much time to just sit around. You could bring your textbooks with you to study, but who wants to deal with the hassle or added weight? With iBooks you can be much more productive during those class breaks.

IBooks textbooks are also cheaper than print textbooks. This is often overlooked by consumers because of the initial high cost of the devices themselves. But long term, the amount of money you save on textbooks will cover the cost of the device. Fourth-year political science major Holly Danson, who uses a first generation iPad, says digital textbooks are “a lot more affordable and I’ve gotten a lot for free.”

Hmmm. Math book for $150, or math book for free? How long will it take for that device to pay for itself? Come on. You’re a college student, you do the math.

Currently, iBooks can only be read in the iBook app compatible with Apple iPhone, iPad and iPod Touch running iOS 4.2 or later (not usable on the Mac computers). It’s currently not supported by Android. But even with these caveats, digital books have much to offer.

IBooks is only the latest in eBooks to hit the market. The wildly successful Kindle eBooks and Nook eBooks are also available. These eReading programs have their own eReaders as well as apps that are compatible on Mac and PC computers, as well as Apple and Android-powered smart phones and tablets. I personally have both Kindle and Nook apps installed on my Macbook Pro and Android phone and iBooks installed on my iPad 2. The point is digital books offer a highly customizable system that can meet your specific needs and platforms.

Despite popular misconceptions, you can write in and highlight digital textbooks. There is also the added benefit that you can embed hyperlinks. Not to mention, iBooks has a snazzy and simple library system. I can guarantee you your history book will be way easier to find in your tablet than lost under your bed in a pile of laundry.

“If I had started college with an iPad I think I would have really loved the iBooks. I think in the future a lot of people will be using eTextbooks,” said fourth-year English major Dani Peeler, who uses a 16G white iPad 2.

Those who oppose the digital book phenomena argue: there’s less retention of material due to lack of sensory stimulation, and reading a LCD screen hurts your eyes.

In rebuttal I say: Were you really going to remember that factoid from your non-major textbook you skimmed anyway? Progress comes at a cost, I’m sure people complained about electricity when it was invented too, but would you want to live in the dark age? You’re swapping back pain from carrying around all those textbooks for bad eyes, but at least with iBooks you save a buck.

Plus, in what other textbook you own can you also check Facebook and play Angry Birds?