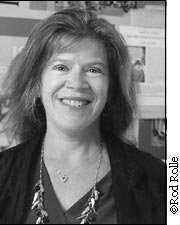 Professor Jody Enders, a University of California Santa Barbara French and theatre professor, has always been bothered that people think of the Middle Ages as terrible, excessively pious and religious, and wanted to introduce the secret world of humor that existed during that time.

Enders discovered the series “Farce of the Farts,” a collection of medieval French farcicle plays that embrace the inner, vulgar child who loves innuendo, and was inspired to teach them to her students. She often speaks in English to her students so instead of waiting for someone else to translate the works, she thought how much easier and fun it would be to do it herself. Enders is adamant in her desire for these texts to be taught in the classroom and presented on the stage.

“I spent a lot of time over the past 30 years on the medieval texts and passion plays and violent things and it does give a kind of skewed vision of the period; there’s this undercurrent of boisterous stuff,” said Enders. “It’s brimming over with life and it’s really irreverent and really funny and politically incorrect.”

She rose to the challenge and embraced the difficulties of translating a medieval age series of texts to make them accessible to the modern reader, while staying true to the quirks and nuances of the language the plays were originally written in. The undertaking was a process of trial and error, but Enders wasn’t intimidated.
“You have to find a cultural touchstone equivalent,” said Enders. “By analogy to linguistics, I’d call it a deep translation. Middle French is hard, so I try to respect every specific term, but you’re looking to transpose what is clearly an idiom in 15th century France to its modern [English] equivalent. It’s one popular culture to another; you have to respect all at once all the different registers. There were a couple moments where I was like, ‘I found it!’”

She admits the farces are “violent, horrible and sexist,” but was attracted to them after 30 years of working and writing numerous books on the serious aspects of medieval literature.

“You don’t understand what the violence looks like if you haven’t first spent all those years in religious theatre, in the passion plays, so now I feel I understand the world,” said Enders.

Enders is not the only person to appreciate the hilarity of the French Middle Ages; in fact, she has been recognized and praised by Terry Jones of “Monty Python.”
“Scurrilous, sexy, stupid, satirical, scatological, side-splitting, and probably something else beginning with ‘s,’ Jody Enders’ translation of 12 French farces is a real discovery that goes a long way to re-adjusting our perception of the Middle Ages. She points out that however silly or banal these farces may appear to us, they nonetheless confront the real controversies of their day over the law, politics, religion, social order, or the battle of sexes,” Jones said in his review.

As Jones points out, though these texts are dynamic and raucous, that is not their sole purpose.  They exist and are worth translating due to their intellectual value. The Middle Ages are not much studied in theatre programs, and she looks to change that.

“People just want to have a good laugh,” said Enders. “Medieval literature is tended to be associated with the church, but it’s also vibrant and alive and really funny and filthy. Students often say they’re surprised at the utter relaxation of taboos, because nothing is off the table.”