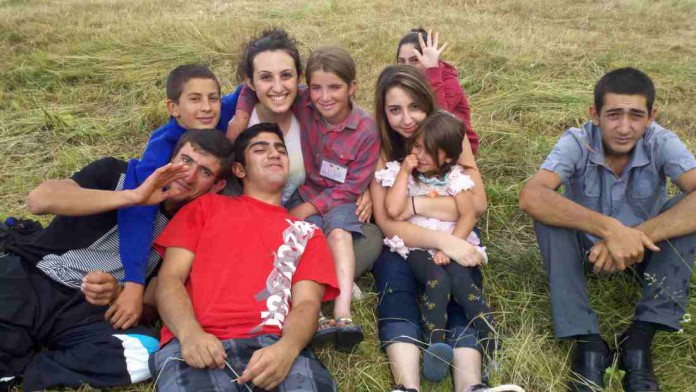 Take a moment and envision life without a cell phone, a TV or even Internet. Now imagine that, but add in being stranded for six months in a snowy mountainous village with only a shop, a school and a pasture. For the people of Akhpradzor, a remote village in the landlocked country of Armenia, this is everyday life.

With a $10,000 grant from the Donald A. Strauss Foundation and over $15,000 in donations and sponsors, five U.S. members spent three weeks in the isolated village as they conducted a children’s summer camp and installed a computer lab.

“We definitely had a lot of challenges with adapting to their culture. That’s all their lives revolve around–their animals and their school. We tried to adapt to their culture first and then bring the new mediums of technology in,” said Balabanian.

Between constructing the seven-computer lab and showing cartoon movies, the group taught arts and crafts, science, sports, first aid, English and computer classes. In their free time, members experienced first-hand the simplicity of Armenian life as they milked cows, herded sheep, met the town honey-maker and made yogurt and cheese.

Everything, right down to the blanket they slept on, was made by hand. In a blog entry, Balabanian explained, “My mattress, pillow and blanket are all hand made by the woman who runs this house. She had to shave her own sheep, clean the wool by whipping it with a special stick, wash and dry it, then sew it in the cloth. After which she carefully had sewn a satin piece of cloth and gave the comforter a special design. Yesterday, she told me she wants to send one to me with my name stitched on the comforter when I get married.”

Although the villagers inspired members through their upbeat singing and constant positivity, it was sometimes difficult to take it all in.

“The conditions in the school really upset me,” said second-year UCSB biochemistry major Astkhik Hakopyan. “There was a recent flood. If you look now, there are cracks and paint chips. It’s not sanitary. It’s not safe.”

After enduring three weeks of constructing, educating and singing without so much as a village doctor, the group left Armenia with plans for new projects.

Their newly-developed pen-pal program allows students to choose one of the 34 elementary and secondary-school students in Akhpradzor to be their pen-pal.

In an effort to satisfy basic humanitarian needs, HRI now has a winter 2012 project called “75 Coats for 75 children.” Twenty dollars buys one winter clothing item for one child. Details on how to donate are on their website, www.hiddenroadinitiative.com.

While HRI has enabled a village with nothing but a dirt path to build a virtual road of its own, the people of Akhpradzor have enabled the HRI members to look outside of themselves.

“I want everyone to go find their own hidden road, their own project to start,” said Balabanian. “It makes you think why you live how you live. It makes you examine the life you’re living. Every time I turn on the heater I think, ‘Wow, what a blessing.’”