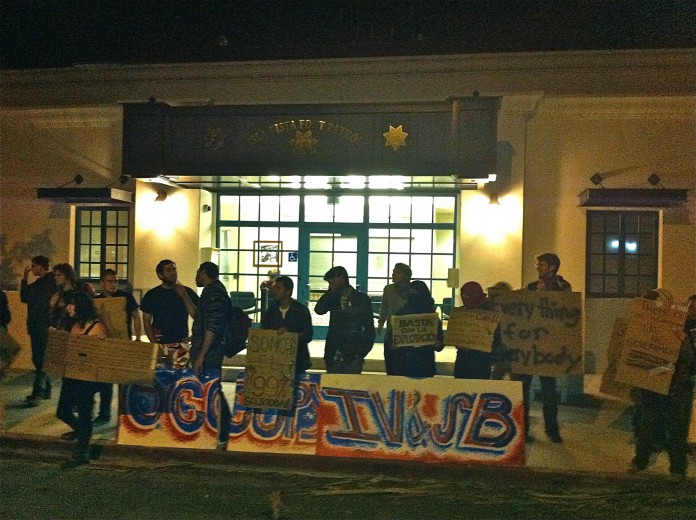 David Bodek, a fourth-year English major at University of California Santa Barbara, was arrested at People’s Park by the Isla Vista Foot Patrol 8 a.m. Monday morning. He is being charged for using camping paraphernalia in a public area in violation of a local ordinance made by the Isla Vista Parks and Recreation District that prohibits the possession of camping gear such as tents and sleeping bags, and sleeping in any public space between a half-hour after sunset and 6 a.m.
Bodek is a contributing member for Occupy Isla Vista and Occupy Santa Barbara, two local groups formed in solidarity with Occupy Wall Street and its goals.
Martin Henderson, a local activist who is also a part of Occupy Isla Vista, was there to witness Bodek’s arrest. According to Henderson, David was keeping warm by covering himself with a sleeping bag and drinking coffee, when almost immediately afterward the Isla Vista Foot Patrol approached David and asked him why he was using a sleeping bag. Bodek affirmed that he believed had a right to be in the park as he was exercising his civil rights as part of a protest and was therefore protected by the First Amendment, whereupon the two officers immediately arrested Bodek for illegal camping. Henderson said that while the police were polite and treated Bodek with respect, “…the arrest itself I’m pretty sure was illegal.”
Occupy Isla Vista collectively reacted to the incarceration of one of their own. Those who witnessed Bodek’s arrest took photos of the event. By 5:30 p.m., the group had gathered in front of the Isla Vista Foot Patrol office, holding signs and chanting “No justice, no peace, we demand David’s release!” and “Occupy! Shut it Down! IV is the people’s town!,” among other things.
Their claim was twofold: Bodek’s arrest was unjustifiable as he was occupying the park as part of a peaceful protest. Furthermore, because he was not sleeping in the park during the stated hours of the ordinance, he technically was not infringing on the terms of the law.
Rich Tellman, the Director of Research and Exploration at Fossilfields Discoveries has recently become involved with Occupy Isla Vista and also witnessed Bodek’s arrest.
“He stood up for not just for the rights of the people in the park but for human rights around the world. I consider him…a very instrumental person in this movement. He is very well respected and very much loved by everyone here,” said Tellman.
Simone Salmon, a freelance musician and Santa Barbara resident, spent much of that day with Bodek’s friends waiting outside Santa Barbara County Jail for his release, and was also present for the protest. Salmon said that all police officers are required to “…enforce all the laws written out in the constitution and all of its amendments, so that obviously applies to our First Amendment right to peacefully assemble.”