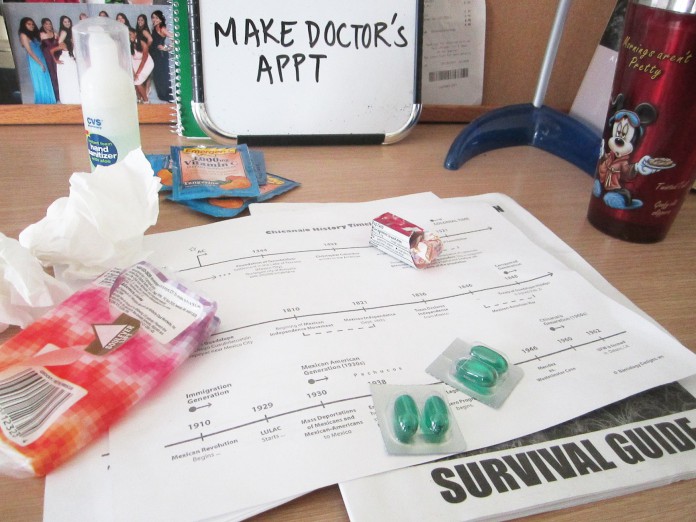 As Fall quarter kicks into full gear and teachers continue to pile on assignment after assignment, another unwelcome friend has been knocking on students’ doors: the flu.

Influenza, as it is otherwise called, is an infectious disease that affects millions of people all over the world annually. It spreads through people via airborne droplets, so living in close quarters with other people can lead to outbreaks. If left untreated, the flu can result in more serious complications, such as pneumonia or even death. Although it begins with irritation in the nose, throat and chest, more serious symptoms can develop, such as muscle aches, vomiting or diarrhea, which can last for up to seven days. It is usually most prominent during the months of January and February, but with the right precautions taken, students can avoid dealing with this inconvenience altogether.

“The good news is that it is entirely preventable with an annual immunization,” she said.

Students have several options in deciding where to get vaccinated. Those who are on the UC SHIP insurance are encouraged to stop by Student Health in their spare time; no appointment is necessary. There is a $20 charge, which is billed to BARC, for students not on the insurance plan.

For those not on the school’s insurance plan, flu shot clinics may be faster and more accessible. Other places around the area such as drugstores and Cottage Hospital also offer flu shots.

To appeal to individuals who don’t want to pay money for a flu shot, there are also organizations that give out free flu vaccines to promote health during the flu season. One that students can take advantage of is on Saturday, Nov. 12 from 10 a.m. to 1 p.m. at the Goleta Valley Community Center on Hollister Avenue. The event, put on by the Santa Barbara Public Health Department and the Santa Barbara County Medical Reserve Corps, will provide free flu shots for the first 750 attendees ages two and up.

Regardless if a student has or has not received the flu vaccine, that should not keep them from prioritizing their health needs. In addition to getting a flu shot, Ferris suggests two simple tricks to avoid spreading illnesses around. The first one, washing one’s hands, gets rid of nearly all of the bacteria that could infect others. Using hand sanitizer is another alternative. The second suggestion is to cover one’s mouth when coughing. Coughing into a tissue or a sleeve can greatly reduce the amount of flu cases spread around, particularly in the dorms where students are in close proximity with others 24/7.

Considering the fast pace of the UC quarter system and the demanding workload many students juggle daily, it is imperative to avoid getting sick. Even a sickness that lasts a couple of days can have a major impact on a student’s lifestyle.

“The last time I got the flu, I was in sick for three days straight,” Tori Samual, a fourth-year psychology major, said. “I could barely get anything done. It really messed up my routine.”

For second-year student Phoebe Jang, being on the Student Health Insurance Plan has benefited her greatly.

“I already go to Student Health whenever anything comes up,” she said. “I plan on stopping by to get my flu shot before the end of the quarter.”

The sooner one receives their flu shot, the sooner they will have to worry less about falling ill to the virus as the winter chill sets in.

For more information on the immunization or anything else flu related, stop by the Student Health office on campus or call the information desk at (805) 893-7129. Getting flu shots may be a pain literally and figuratively, but in this case they are arguably for one’s gain.